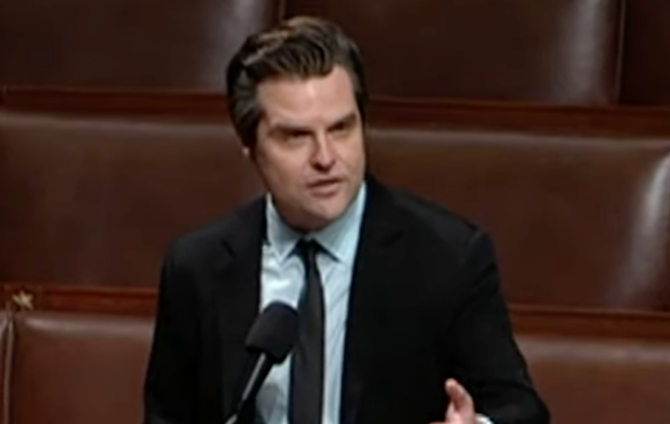 Republican Representative Matt Gaetz took to the House floor Monday to speak about the importance of holding sex offenders accountable for their crimes. Let that sink in for a second.

Gaetz, of course, is currently at the center of an investigation into child sex trafficking, bribery and obstruction of justice.

But that didn’t stop him from being one of the few Republicans to support a bill that would end mandatory arbitration for workplace sexual harassment cases.

“Here is the question presented: Should sexual harassers who work for big businesses get to pick their juries in advance?” Gaetz said. “I believe that the populist, nationalist right approach is to believe that the Article 3 courts, that we have set up for any and all, function as the proper venue. But for tens of millions of American workers, that courthouse door is locked!”

He added that corporations’ advantage in arbitration hearings “shouldn’t be a reason that someone is more likely to have to endure sexual harassment in the workplace, or more likely, to evade consequence as a result of predatory behavior.”

In January, Florida radio host “Big Joe” Ellicott issued a guilty plea to “pay bribes and kickbacks,” and also to illegally selling Adderall. His plea deal requires him to cooperate with other ongoing investigations in exchange for a reduced sentence.

Ellicott is a close friend of Joel Greenberg, Gaetz’s former “wingman” who is also cooperating in the investigation.

Ellicott is reported to know key details that could corroborate Greenberg’s version of events.

Greenberg pleaded guilty to federal crimes including sex trafficking of a minor, identity theft, wire fraud, and conspiracy last May. As part of his plea deal, he agreed to provide “substantial assistance” to investigators in their case against Gaetz.

Gaetz continues to deny any wrongdoing.

Gaetz is trying to improve his image. I don’t think it will work.

Hopefully he will be the one to realize “more consequences“ before long!

A guilty conscience often accuses. Matt Gaetz needs to be brought up on charges.

A portion of his community service sentence not yet announced on his plea????

Does he think we’ve forgotten already? Is he trying to score points like he isn’t under investigation for having it off with a minor? There SHOULD be more consequences, Matty and you’ll find out soon enough, eh?