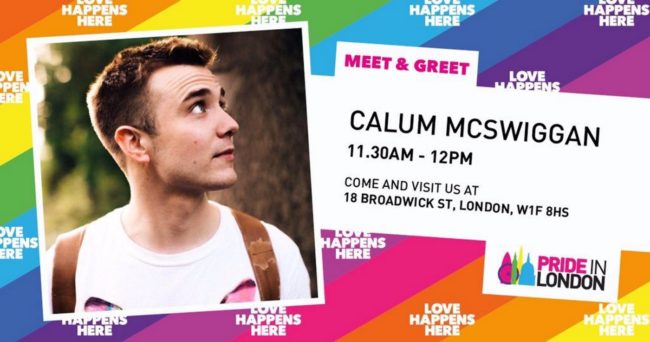 First it was some potentially misguided Pride posters that had queer Londoners up in arms, and now there’s this: Social media has lit up with criticism over the fact that Pride in London has partnered with YouTuber Calum McSwiggan, who last year was charged with filing a false police report in Los Angeles. He initially told police he was the victim of an antigay attack.

McSwiggan will appear at an official Pride in London meet and greet, using the opportunity to promote his personal brand at the event.

It’s been reported that Pride organizers were aware the partnership may be controversial, but that they decided since he’d apologized for his actions, he should be given another chance.

In November, the British YouTuber pleaded guilty to vandalizing a vehicle during the incident, and was sentenced to three years of supervised probation, 52 anger management sessions, and ordered to pay $7,000 in compensation. As part of his plea deal, the false police report charge was dropped.

He initially told his followers he’d been targeted by three men for being gay outside of the Abbey in West Hollywood, and shared a bloodied photo from his hospital bed

His wounds were later revealed to be self-inflicted.

It may be water under the bridge for Pride in London, but Twitter has a decidedly different take:

London Pride HQ: "okay, so they thought those posters were bad. Time to unleash McSwiggan" https://t.co/XaL9FC173o

It's awful isn't it? This is why I can't stand Pride season. No wonder homophobia still exists when McSwiggan, etc are "role-models"

Nooope. Don't want to meet a YouTuber who *literally* faked an LGBTQ+ hate crime for self promotion, at a Pride event.
Absolutely shameless. pic.twitter.com/1Fe16QyVpg

Part of me really wants to go just to cause a fuss. It's disgusting they have him booked.

Ouch. What a horrendous booking.

A spokesperson for Pride in London told PinkNews: “We are aware of the incident he was involved in and followed the outcome closely.

“Our view is that he was dealt with by the courts and that, having paid his dues and apologised, we should maintain our support for Calum and all the good work he does in the community.
“Everybody deserves another chance, but – as guardians of London’s Pride event – we carefully review our partnerships on an ongoing basis.”

The spokesperson added: “At Pride in London we share concerns about hate crime and the lasting impact they have on victims.

“The fight against homophobia, biphobia and transphobia is a major focus in everything we do. Our recent research and campaign highlights this.

“Calum featured in our #NoFilter campaign last year as one of our supporters and he will be one of 24 gay, lesbian, bisexual and trans influencers attending a meet and greet on Saturday.”

McSwiggan has not responded directly to the story, but Tweeted: “I wish gay men would stop trying to tear one another down. We should treat each other with the love & acceptance we preach to others about.”

I wish gay men would stop trying to tear one another down. We should treat each other with the love & acceptance we preach to others about.