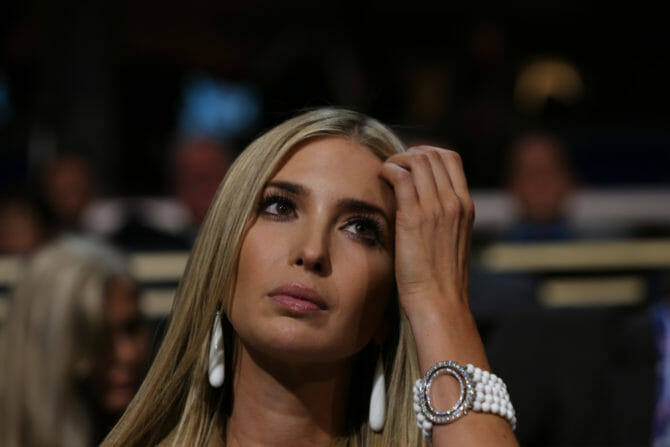 The Washington Post reports that Hudson’s Bay pulled all Ivanka Trump products from its website on Friday. It also announced that it would stop selling Ivanka Trump’s products in its physical stores.

“As part of our regular course of business, we review our merchandise offerings and make appropriate changes,” the company said in a statement. The first daughter’s company had been notified of the decision last fall, it added.

Hudson’s Bay is just the latest department store to cut ties with the first daughter’s company.

Nordstrom was the first, who back in early 2017 confirmed that it had stopped carrying the brand due to “brand performance.” Nordstrom had been a target of the #GrabYourWallet campaign, which aims to boycott stores selling Trump family products.

“Companies are now starting to understand if they want to do business with the most savvy women in the country, they’re going to have to show us they’re serious about moving away from divisiveness that the Trumps represent,” said Shannon Coulter, the co-founder of #GrabYourWallet. “It’s not a Democrat or Republican thing, it’s a basic human decency thing.”

Neiman Marcus first pulled the brand’s jewelry from its website after Nordstrom announced it was cutting ties with the line. The jewelry reappeared briefly in March, 2017 but no longer appears on the store’s website.

Other retailers to follow were Gilt, ShopStyle and the Home Shopping Network. TJMaxx and Marshalls instructed employees to trash all Ivanka Trump signage and mix merchandise into the racks. Other retailers who continued to carry the first daughter’s products discounted the line significantly, as much as 50, 60 and even 70%.

Sak’s Fifth Avenue, which is owned by Hudson’s Bay, does not offer Ivanka Trump merchandise online. But the company continues to sell the brand’s shoes at their outlet retailer, Saks Off 5th, both online and in stores.

In an April, 2017 statement to Elle, a rep for Saks Off Fifth said, “Across our banners, we aim to deliver a strong assortment of fashion. We respect our customers’ right to choose the brands that work for them. In turn, our customers’ choices inform our decisions on which merchandise we offer. The Ivanka Trump line is available in Saks Off 5th stores.”

According to Bloomberg, in addition to Saks Off Fifth outlet stores, Ivanka Trump’s retail partners still include Walmart, Zappos, Macy’s, Bloomingdale’s and Dillard’s.

The first daughter stepped down from overseeing her company’s day-to-day operations after joining her father’s administration. Regardless, she continues to profit from the company. Disclosures reveal that Trump made around $5 million from the brand in 2017.