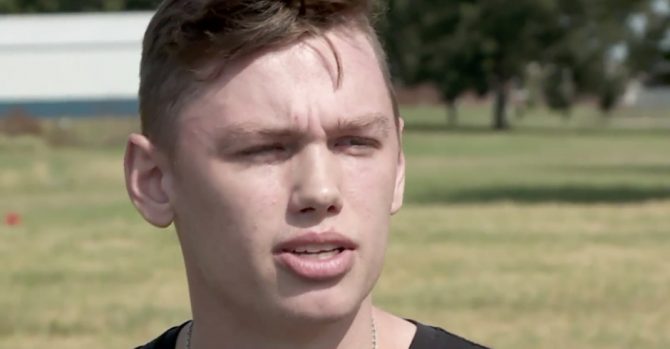 A young Oklahoma man has filed a police report against members of his own church after he says they tried to beat his homosexually out of him.

23-year-old Sean Cormie says he was circled by about 15 of his fellow congregants at the 1st Assembly Church in Blackwell, Oklahoma, who held him down and began punching him in an attempt to “pray away” his homosexuality.

The alleged attack happened on September 8 after Cormie brought his boyfriend Gary Gardner to church at his family’s urging. Towards the end of the service, he says the pastor went on a long tirade against homosexuality.

That’s when the group surrounded him and shuffled Gardner out the door.

“They hold me down, pin me down, and I’m crying, and the Holy Spirit just comes through me, and they keep speaking in tongues, praying over me,” Cormie tells local news stations KFOR. “I was just crying ‘mercy, mercy.'”

According to Cormie, congregants shouted, “It’s a sin! It’s an abomination! You need to realize, wake up, and see it for a sin!” as they beat him.

Meanwhile, Gardner tells News 9 that they picked Cormie “up and body slammed him over and started praying on him, and when they were doing that, Sean ended up with marks on his arms a black eye and sort of blacked out.”

In response to the allegations, pastors Bill and Tami McKissick released a statement saying the incident “began as a family matter that escalated.”

“Our church would never condone restraint of any person unless they were engaged in violent activity,” the statement reads. “There is much more to this incident, and we are cooperating fully with law enforcement to hopefully bring all of the facts to light as a rush to judgment is not in anyone’s best interest.”