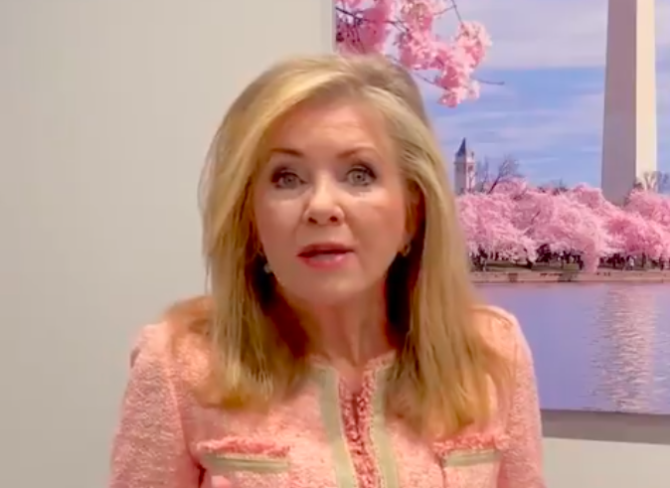 Marsha Blackburn has been trending all morning on Twitter after she became the laughingstock of the internet when she blasted Dr. Anthony Fauci for having the audacity to write a book.

Blackburn, who opposes same-sex marriage and doesn’t think gay parents should be allowed to foster children or that LGBTQ people deserve any workplace protections, was referring to Fauci’s upcoming 80-page book titled Expect the Unexpected: Ten Lessons on Truth, Service, and the Way Forward, which will be released by National Geographic Books later this year.

We won’t waste our time talking about how compiling 80 pages of words hardly counts as a “writing a book,” especially for scientists, who spend the vast majority of their time doing research and writing papers.

We also won’t waste our time talking about the fact that Fauci’s “book” is mostly just a rehash of interviews he gave throughout his 34-years as the director of the National Institute of Allergy and Infectious Diseases.

Instead, we’ll talk about how people are responding to Blackburn’s fake outrage over the whole thing.

Seriously Marsha?
While Americans suffered, Sen. Marsha Blackburn ALSO wrote a book, and even went on The View to promote it in Oct 2020 😂😂😂 pic.twitter.com/GSptE2U16j

While Americans suffered, the Former Guy refused to read or acknowledge anything that might have kept hundreds of thousands of us alive.
And that was after he tried to change the path of a deadly hurricane with a Sharpie.

While Americans suffered you tried to overturn an election.

And you chose to double down on misinformation that would kill even more Americans. Nothing so benign as writing a book

You should consider reading one.

While Americans died, Marsha made sure Tennesseans didn’t have healthcare

While Americans suffered, Trump and Jared Kushner made sure they died

While Americans suffered, Marsha and the GQP went on vacation rather than hold a vote on the stimulus plan.

While Americans suffered, Republicans continued to deny the seriousness of the COVID pandemic and vote against financial relief.

While Americans suffered, Marsha Blackburn lied for a sad racist clown. And still does.

It’s pretty stunning how productive that guy is! He managed a pandemic, did daily teevee conferences next to an insanely tyrannical moron boss, and wrote a book — at the same time!
Heroic.
And nice of you to notice.

Rather than, say, listening to what people were saying and maybe reconsider her line of attacks on Fauci, Blackburn doubled down this morning when she posted a racist video spewing misinformation about “the Wuhon lab” and accusing the doctor of cooking up a narrative with Mark Zuckerberg (a.k.a. “Big Tech”) to trick everyone into believing something that wasn’t actually true and blah, blah, blah, blah, blah.

Here are the facts on Fauci that big tech doesn’t want you to know. pic.twitter.com/qDAdMOFMFq

Much like her original post attacking Fauci, the responses to Blackburn’s video rant didn’t land with people the way she had hoped…

I can’t believe this person is in the United States Senate representing my state.

“BIG TECH DOESN’T WANT YOU TO KNOW THIS!,” she posted to millions of followers to Twitter from her iPhone.

Hmmm, should we trust the science guy or the crazy lady with the home economics degree. pic.twitter.com/phOrSqyWDH

“I’m using big tech to complain about big tech” is one of the most Republican flexes out there.

Who is big tech and why are they always not wanting me to know things?