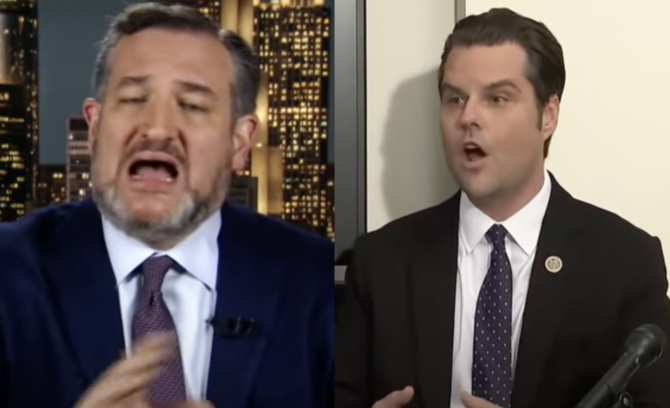 While speaking to reporters alongside Marjorie Taylor Greene on the anniversary of the January 6 insurrection, Matt Gaetz blasted Ted Cruz for calling the siege a “violent terrorist attack” earlier in the week.

Gaetz said he disagreed with Cruz’s choice of words then mocked the Texas senator/rumored 2024 presidential hopeful by saying he can “bend over” all he wants but nobody will ever love him.

“The establishment will never love you, Ted,” Gaetz jeered. “You know, you can bend over and bend a knee for them, but they’re just not going to love you.”

Seriously, Ted Cruz “bending over” is a mental image we definitely did not need today, or any day for that matter. But thanks to Matt Gaetz, we’ll never be able to scrub the disturbing picture from our minds.

The accused sexual predator continued by saying, “I think that was maybe an effort by the good senator, who we agree with on many, many things, to recast himself in the eyes of some of the folks in your profession, but we didn’t find it particularly factual or sincere.”

Gaetz: The establishment will never love you Ted. You can bend over… they’re just not going to love you pic.twitter.com/e4Fh6mlveH

After using the words “violent terrorist attack” on Wednesday, Cruz went on Tucker Carlson’s show last night to beg forgiveness from the Fox News propagandist and his viewers for offending them.

When Carlson asked why he used those specific words, Cruz said his phrasing was “sloppy” and “frankly dumb.”

“It was a mistake to say that yesterday,” the antigay senator apologized, “and the reason is what you just said, which is we have now had a year of Democrats and the media twisting words and trying to say that all of us are terrorists. Trying to say you are a terrorist, I am a terrorist.”

Ted Cruz grovels apologetically to Tucker Carlson for his "sloppy" comments about January 6 being a "terrorist attack" pic.twitter.com/ZBPgLLBWIL