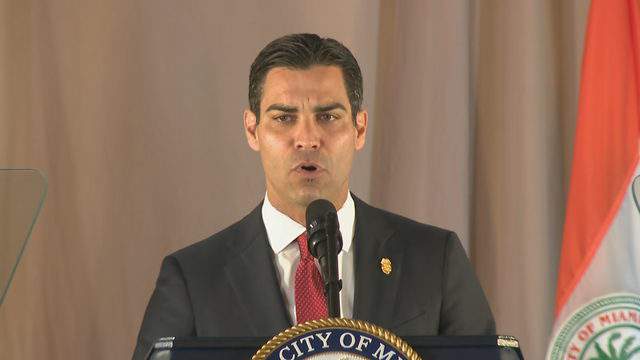 Miami boasts one of the largest LGBTQ communities in the world and is considered by many to be a queer mecca, attracting more than 1 million LGBTQ visitors each year. Which is why it’s extra strange the city’s mayor, Francis Suarez, has been caught palling around with Brazil’s super homophobic president Jair Bolsonaro, a.k.a. “Tropical Trump.”

The Miami New Times reports that Bolsonaro, who hates LGBTQ people, women, and other minorities, but loves dictators and thinks Hitler was great, is currently attending an international business conference at the InterContinental Miami, where Mayor Suarez is expected to honor him sometime today.

Naturally, a lot of Miami residents aren’t too happy about this. Activist Billy Corben called the it “a disgrace” and “a new low” for Suarez. But the mayor insists that honoring a person who has done horrific things doesn’t mean he personally endorses their views or actions.

“As Mayor, it’s my job to receive heads of state and other public officials,” he said in a statement. “All public figures are properly subject to scrutiny and criticism, and all elected leaders have supporters and critics.”

“Meeting with them does not constitute an endorsement of all their views and actions. It is simply a recognition of the special relationship that exists between the people who freely elected us to represent them.”

That may be true. But there are always exceptions. Like, say, when the person declares himself a “proud homophobe,” likens LGBTQ people to pedophiles, and proclaims he’d prefer “a dead son rather than a gay son.”

Or when, on his very first day as president, he signs an executive order stripping away rights for LGBTQ people.

These are all things Bolsonaro has done. But Suarez seems totally unbothered by them. And this isn’t the first time the mayor has been caught palling around with problematic people, either.

In the past, he honored self-help guru Tony Robbins shortly after Robbins was accused of sexual harassment and groping by both fans and former staffers. Suarez said his decision to do so was based “solely on his decades of serving as a positive force.”

And just last year, he endorsed Bolsonaro’s son, Eduardo Bolsonaro, who is equally as homophobic as his father, to be Brazil’s ambassador in Washington, D.C. Bolsonaro didn’t end up getting the job, but Suarez still said he would welcome him “with open arms.”

Related: Brazil’s homophobic president borrows a play from Trump, tweets video of men urinating on each other