The Timely: Changing the Game

The much-buzzed-about documentary chronicling the plight of transgender athletes around the United States finally lands on Hulu this week. Today, it plays even more relevant than when it debuted on the festival circuit two years ago. Changing the Game examines how different states approach the role of transgender athletes in sports. For Mack, a trans man living in Texas, that means competing on the women’s wrestling team. For Andraya, a woman in Vermont, that means running with the girls…and suffering the ridicule of the crowd. Changing the Game personalizes the struggles of trans teens in a way never quite seen on film before as it brings into focus the passion of the athletes, and the venom they inevitably face. Moreover, at a time when states have begun to target transgender teenage athletes like never before, the film illuminates the need for a thoughtful, well-mannered and scientific discussion on how to best facilitate—and protect—transgender youth. A film both provocative and inspiring, it’s a terrific way to kick off pride month.

The Art House: The Sound of Identity

Director James Kicklighter returns with this documentary, his first film in seven years. The Sound of Identity follows opera singer Lucia Lucas, a transgender woman who lands the title role in a Tulsa production of Mozart’s Don Giovanni. While the format follows the typical “race to opening night” scenario focusing on the stress rehearsals take on cast and crew, Kicklighter punctuates that story with Lucas’ own struggles as a married, transgender woman somewhat estranged from her family. Meanwhile, the Tulsa Opera struggles to use the notion of an opera with a transgender lead as a hook to attract audiences, while not coming off like Jerry Springer–style exploitation.

The Sound of Identity really soars when it focuses on Lucas the actress. Armed with a majestic baritone voice and passionate acting chops, she commands the screen (and stage) with a towering presence. Featuring a magnificent score of Mozart tunes and a tremendous, original talent at its center, The Sound of Identity plays like a reminder to viewers everywhere: what an actor does on stage or screen has nothing do to with her real life.

The Guncle-Ready: Madagascar – A Little Wild

This animated spin-off of the popular Madagascar film series returns for a third season this week, bringing with it a welcome queer character. This season introduces the character Odee (voiced by nonbinary actor Ezra Menas), a nonbinary okapi (an actual animal that resembles a zebra but is technically a member of the giraffe family) bringing a bit of fabulousness to the New York Zoo. This season also takes the radical step of introducing a pride parade to the proceedings, and features a full-on song and dance number sung by Menas (whose credits include the upcoming West Side Story and Broadway’s Jagged Little Pill). It’s a delightful way to ring in June with the kiddles, nieces, nephews, or just your inner pre-schooler.

Put away the wire hangers: the “Mommie” of all camp classics makes a comeback this month in the form of a new, 40th Anniversary Collector’s Edition Blu-ray set. Chances are, if you’re reading this column, you’ve already seen (and can quote from memory) Mommie Dearest, the so-bad-it’s-amazing biopic of screen legend Joan Crawford, in which Faye Dunaway doesn’t chew scenery so much as swallow it whole, boa constrictor-style. This new set features a new 4K restoration of the movie, a new commentary by avowed fan and drag queen Hedda Lettuce, a biographical documentary on director Frank Perry, as well as a previously released commentary by John Waters, and several other supplemental shorts. It’s a must for Mommie enthusiasts, Crawford fans, lovers of camp, or anyone that enjoys a trainwreck-style campfest.

The Rock: Melissa Etheridge “One Way Out”

Oscar and Grammy-winning lesbian siren Melissa Etheridge returns with her newest single this week, a heavy rock ballad, and the debut single off her forthcoming album. Word has it that Etheridge actually wrote and recorded “One Way Out” years ago before stumbling on it earlier this year in her archives. The song—which she never released—had a certain urgency about it now. Hence, the new recording. We’re always fans of the raspy fury of Ms. Etheridge’s vocals, and this tune’s throwback to some of her early, bluesy work is a welcome add to her catalog. 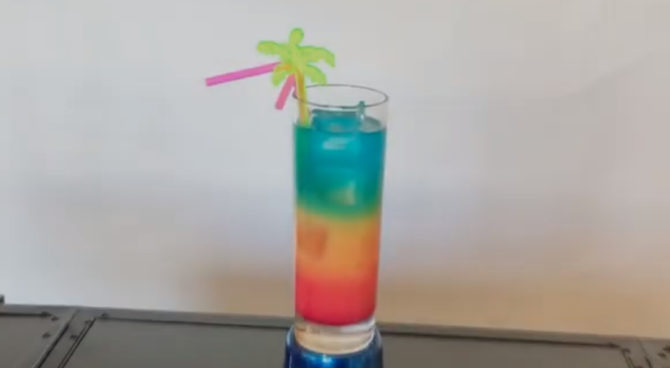 Pride month has at last arrived, and this year, it looks like we’ll be able to actually celebrate together (once again…vaccinated). As such, we offer up this fruity, fragrant and fun beverage that channels a bit of rainbow magic. No doubt it will have you ready to show yours off, too.