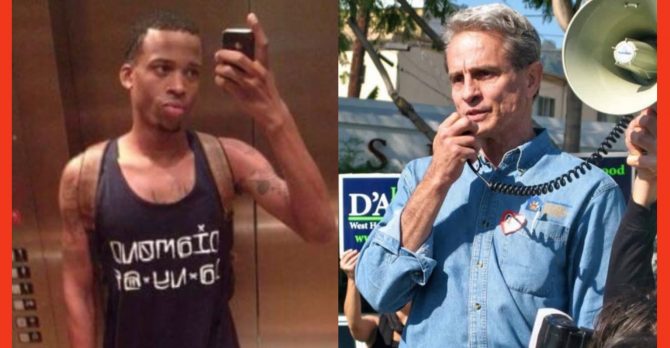 The mother of Gemmel Moore, the 26-year-old who died of a drug overdose in the home of Democratic donor Ed Buck, has filed a wrongful death suit, alleging that Buck injected her son with crystal methamphetamine. The suit also alleges that Los Angeles County Dist. Atty. Jackie Lacey and Deputy Dist. Atty. Craig Hum refused to prosecute Buck because he is white.

Lawyers for LaTisha Nixon, the mother of Moore, had harsh words for law enforcement. “If the dead body of a blond-haired, blue-eyed white man was found in the home of an older black man, he’d be lucky to even make it to the police station alive,” they said in a statement.

Gemmel Moore died in the Los Angeles home of Ed Buck in July 2017. Another gay, black man, Timothy Dean, died in Buck’s home in January 2019. An autopsy determined that Moore died of a methamphetamine overdose. Police have yet to release Dean’s cause of death. Buck was present at the time both men died, but has not been arrested or charged with any crime.

Nixon’s lawsuit alleges that Buck forced her son to inject methamphetamine as part of a sexual encounter. The suit also alleges that the deaths of Moore and Dean are part of a larger pattern of behavior by Buck, who preys on gay, black men for drug-fueled sex. In addition to the charges of wrongful death, battery and assault against Buck, Nixon’s lawsuit further alleges DA Jackie Lacey violated Moore’s civil rights for not prosecuting Buck. Lacey is the first black District Attorney in the history of Los Angeles County.

The office of DA Lacey has declined to comment on the lawsuit.