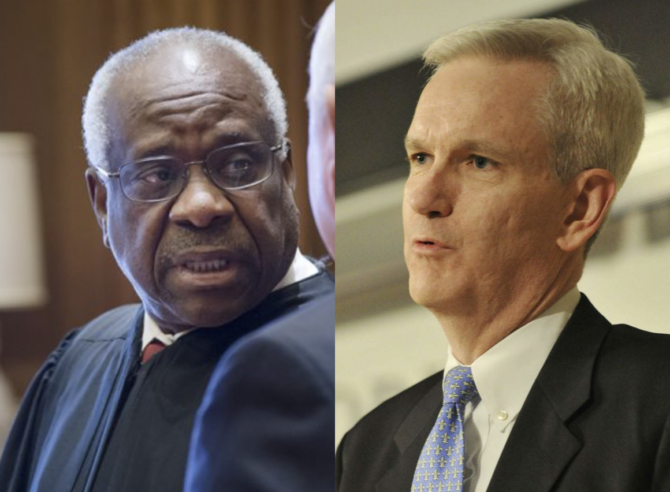 “Mr. Justice Thomas had much to say today about my loving marriage,” McDonald, who married his husband Charles Gray in 2009, said on Facebook. “Oddly he didn’t have much to say about his ‘Loving’ marriage.”

“Loving”, of course, is a reference to Loving v. Virginia, the 1967 U.S. Supreme Court ruling that overturned a Virginia ban on interracial marriage. The 2016 film Loving tells the story of Richard and Mildred Loving, the plaintiffs in that landmark case, and was nominated for several awards, including a Best Actress Oscar nod for Ruth Negga.

Ironically, Thomas, who is Black, lives with his wife Ginni, who is white, in Virginia. In 2015, he was one of the four justices who dissented in Obergefell.

McDonald and Gray were married six years before that ruling, when McDonald was serving in the state legislature. Their wedding was officiated by then-Stamford Mayor Dannel Malloy, who later became Governor of Connecticut.

In 2013, Malloy nominated McDonald to become the second openly gay man to serve on an American state’s Supreme Court. Today, he is one of eleven LGBTQ state supreme court justices serving in the United States.

Related: Lori Lightfoot just said what everyone else is thinking about Clarence Thomas

“We will not live in a world, not in my city, where our rights are taken from us or rolled back,” she said, before declaring, “F*ck Clarence Thomas!”

Video of the moment has been blowing up on Twitter.

In an exclusive interview with Queerty last week, attorney Roberta Kaplan, who represented Edie Windsor in United States v. Windsor and successfully convinced the Supreme Court to strike down the Defense of Marriage Act in 2013, cautioned people against catastrophizing the Roe decision.

“I obviously understand fear and depression, but I would urge people to overcome that,” said Kaplan. “One thing I can say that could help to buck people up is the fact that LGBTQ rights in our country evolved and developed at a faster pace than any other minority group in recent history.”

She added, “It was an enormous achievement over a relatively short period of time when you compare it to, say, the rights of African Americans under Jim Crow. Backlash is inevitable, but it doesn’t mean our rights are all going to be taken away. ”

“The number-one thing that LGBTQ Americans have to do is to vote and to make sure that every single person who knows and loves them votes for candidates who believe in our Constitution, who believe in equal protection, and who believe in the equal dignity of all Americans, regardless of who they love, the color of their skin, or who they marry.”

Clarence Thomas is 74. Samuel Alito is 72. Who do you want in office when they die? That should be the SOLE factor affecting your general election vote from now until they die.

Clarence Thomas on the Supreme Court wants to make gay sex illegal again. Lawrence V. Texas isn’t even twenty years old yet, and that’s how long gay men have had the right to have sex in this country. #GLBT #LGBT

gays having to deal with monkey pox AND clarence thomas during pride is a lot, tbh

The last person I want to hear from on the planet about anything is Justice Clarence Thomas, who just said they should now go after gay marriage and birth control next.

Funny how Clarence Thomas made no mention of overturning Loving v. Virginia. He can strip women and the LGBT community of their rights, but I just know not being able to be with his homely looking yt woman is too far for him.

While Clarence Thomas is doing his “We’re coming for the gays next” spiels, WE can come for HIM first. Push your politicians to hold him and his wife responsible for their part in the January 6 insurrection. #ImpeachClarenceThomas

Both Clarence Thomas and his wife Ginni Thomas are criminal traitors and they need to be in prison.

When I woke up from surgery, the nurse asked if there was anything else she could do to help me feel better.

I don't get all of this heady discussion as if Clarence Thomas is considering law when he threatens Marriage Equality, privacy of sexuality and contraception. He's a petty little prig pissed that people are picking on his right wing radical wife. He's not a judge. He's a prick