Out country star Orville Peck’s new music video isn’t your first rodeo, you say? Perhaps it’s your first one populated not just by cowboys but by drag queens and two-spirit folks, too.

The video for Peck’s single “Queen of the Rodeo” hit YouTube on February 24. Come for the cameos by DRAGULA queen Louisianna Purchase and model Tess Holliday; stay for the lead performance of Canadian drag talent Thanks Jem as Miss Bitter Prairi, a beauty pageant contestant who gets a morale boost from seeing Peck performing on TV.

The eight-minute masterpiece, directed by Austin Peters, ends with a written tribute: “For all the LGBTQ+ and two-spirit community members working and performing in rodeos, ranches, and roadhouses across North America.” 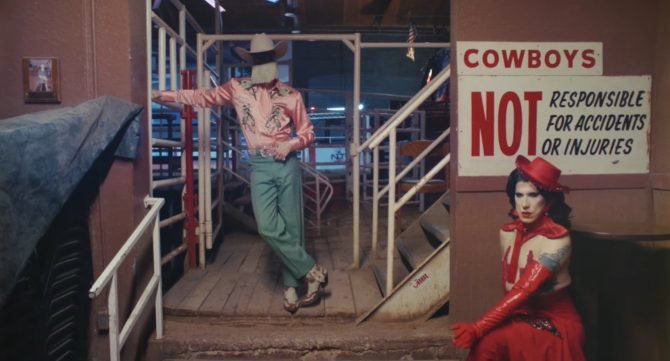 In a statement, Peck describes both the song and the music video as a tribute to Jem, a friend of his. “Jem is a First Nations drag queen from Vancouver, BC, and also the star of our video,” he says. “She’s always fighting against perception and has a hard time fitting in with the other queens, but to me she has always been a star. The song and video are about allowing yourself to get out of your own way, beat your demons, and crown yourself queen of the rodeo.”

have you seen it yet ??!?! wow thank you @orvillepeck this old lady feels all the feels #coolmom is the #queenoftherodeo ???? so many amazing ppl in the video and the bts of others who help from behind couldn’t have done it without you xoxo Mom

FYI, Peck is a gay, Canadian, punk music emigre who uses a pseudonym and famously keeps his identity hidden by a fringed Lone Ranger-style mask. The Juno Award-nominated musician broke onto the country music scene last year with his debut album Pony.

In describing his sound, The New Yorker observed that he has a “voice with the sexy, menacing melodrama of Roy Orbison, run through the filters of New Wave and the opening theme of Rawhide.”

Raved NPR Music: “Orville Peck’s Pony might be the most engaging and eerie album to come along in quite some time. With a haunting croon that adds to the mystique, Peck mixes a classic country sensibility with nostalgic ballads and a contemporary gothic vibe.”

Peck is touring this spring and summer — check out the tour dates here.