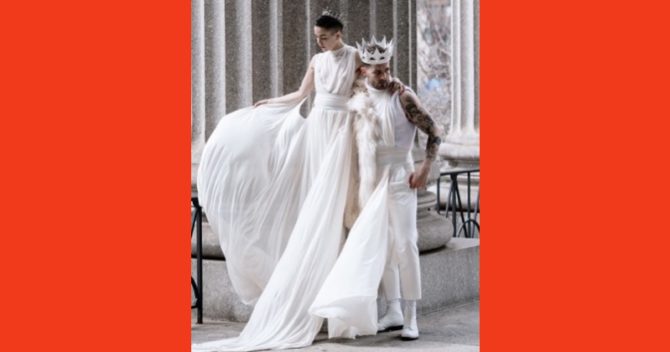 Actor Nico Tortorella has never been one to shy away from showing the world his truest self, and the bisexual star has now gone public with his marriage to longtime partner Bethany Meyers, a fitness professional, and a self-identifying gay woman.

For the last 11 years, the couple have been in a polyamorous relationship.

On Instagram, Tortorella shared some photos from the big day along with the caption “Just married. For real.”

The actor wore a flowy white dress at the ceremony, adding some fun genderbending realness to the joyous occasion.

The couple explained the aesthetic to Them:

“the looks are everything we’ve ever dreamed of. genderbending ensembles designed by our dear friend andrew morrison. timeless androgynous paraphernalia mimicking romanesque sculpture that fluidly blends masculine and feminine. in this relationship, we both wear the pants and the dress. we put on our faces and machinery, finally topping each other off in crowns. duh, we wore crowns. not for the gag of it all, but because it feels like something we’ve done in the past, so we had to keep the tradition alive. in this life’s iteration, this is, in fact, our royal wedding.”

They also shared this message of love to the inevitable haters out there:

Here we are, the day I dreamed of yet not the day I imagined, and I couldn’t be happier. Plenty won’t understand it, something I’m gradually learning to accept. For others, it will help open their eyes to different ways to love. And for some, our story will make them feel less alone. It will give them strength to ask for the things they want and need in a partner. As traditional as we may appear on the outside, we are far from it on the inside.

Scroll through some shots from the ceremony below:

just married. for real. @bethanycmeyers and i wrote a very special piece about our wedding and unconditional love exclusively for @them – link in bio. we love you all, no matter what. 399. @andrewmorrisonstudio @victoriamatthews_ #allofitisyou