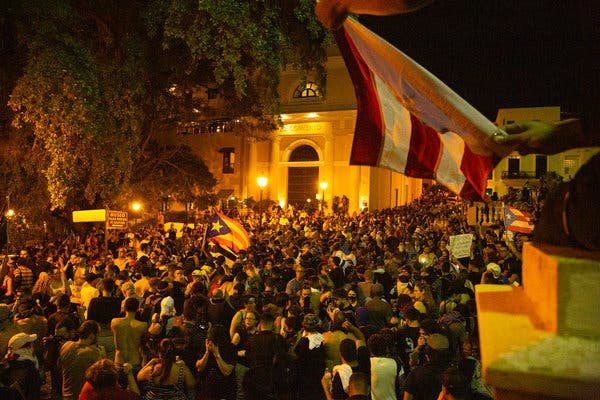 Though he seems to be in denial about it, Puerto Rico Governor Ricardo Rosselló’s days in office seem to be numbered.

Rosselló has been facing criticism for some time now regarding his mishandling of Hurricane Maria funds in 2017. The situation became exacerbated over the weekend when a local media outlet published almost 900 pages from a leaked private group chat between him and 11 of his cronies revealing homophobic, misogynistic, and other vile remarks.

Among the homophobic writings are jokes about people’s sexualities and repeated use of the word “c*cksucker,” as well as the terms “unprecedented c*cksucker” and “historic c*cksucker levels.”

In one message, Rosselló takes aim at Puerto Rican singer Ricky Martin, writing: “Nothing says patriarchal oppression like Ricky Martin. Ricky Martin is such a male chauvinist that he f*cks men because women don’t measure up. Pure patriarchy.”

In another, he jokes about a picture of a woman wearing a t-shirt that reads “Antipatriarchy, Feminist, Lesbian, Trans, Caribbean, Latin American,” writing, “That must be some type of record, isn’t it?”

Other messages include wisecracks about people’s weight, calling his female colleagues “whores,” fantasizing about shooting political opponents, and celebrating an activist’s untimely death.

Yesterday, thousands of demonstrators gathered outside of the governor’s mansion in San Juan to voice their anger and demand Rosselló’s resignation. Things quickly turned chaotic, however, when police in riot gear showed up and started shooting tear gas, pepper spray, and rubber bullets into the crowd.

The volleys of gas just after 8:30 p.m. dispersed much of the gathering that had swelled outside of the governor’s mansion, La Fortaleza. But some protesters defied the authorities, sitting in a row in front of the police wall, raising their arms and holding hands.

“¡Somos más y no tenemos miedo!” they yelled. There are more of us, and we are not afraid.

One man, his face covered in a black bandanna, urged the officers to move, reminding them that they, too, are Puerto Ricans. Another man, his face bare, stood silently, shaking his head.

“We are here to preserve the right of free expression,” he told media. “We are going to defend democracy until the last drop of blood.”

The people of Puerto Rico are calling on their governor to resign.

This is one video from last night.#RickyRenucia

Our report for CBSN on what happened last night in front of the Governors mansion in San Juan, Puerto Rico pic.twitter.com/5NgEiSybCG

Despite everything, Rosselló is refusing step down, telling a local radio interviewer this week, “I’m going to continue. We are all bruised. I’m bruised. But I recognize it, and I have to get back up.”

Meanwhile, legislation to bring impeachment charges against him has already been introduced in Puerto Rico’s House of Representatives, though leaders from the governor’s New Progressive Party say they want to give him a little more time to “reflect on his future.”