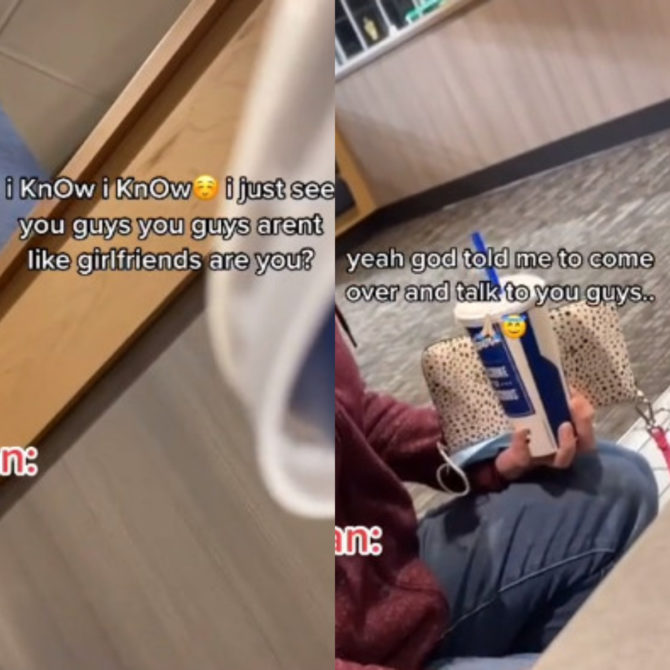 A woman described as a “Christian Karen” has gone viral this week after harassing two teenagers in a fast-food restaurant. The reason: she thought they were two lesbians on a date.

TikTok user @Kaleesh (real name Kaiden) uploaded a video of the incident, taken March 10. In it, an unidentified woman comes and sits down with Kaiden and his female cousin Jordan, assuming the two are lesbians on a date.

here’s the vid with the captions for those who wanted it. #fyp? #foryou @defnotjordanjames

“Do you guys go to church anywhere?” the woman asks. Kaiden just stares at her, stunned, eating his waffle fries. “Do you know how to get to heaven?” the woman presses.

“I don’t, like, I don’t know you at all,” Kaiden’s cousin Jordan replies, incredulous.

“You guys aren’t girlfriends, are you?” the woman continues. Jordan explains the two are cousins, and that their relationship is really none of the woman’s business.

“I just want to let you guys know because they don’t teach you young kids about God anymore, and it’s just not the right way to live!” the woman explains. She also adds that God told her to come over and talk to the cousins.

The woman then bids farewell saying, “God bless.” At that point, Jordan turns to Kaiden and says what all of us are already thinking.

Beginning last year the term “Karen” has come to describe any woman–often blond, white and wealthy–who behaves in an intrusive or entitled manner. The term became especially popular to describe anti-mask-wearing women during COVID-19, and racist women during the Black Lives Matter protests.

Maybe we need a new term for meddlesome, homophobic women that feel entitled to harass others with their religious beliefs. Suggestions? Share in the comments.