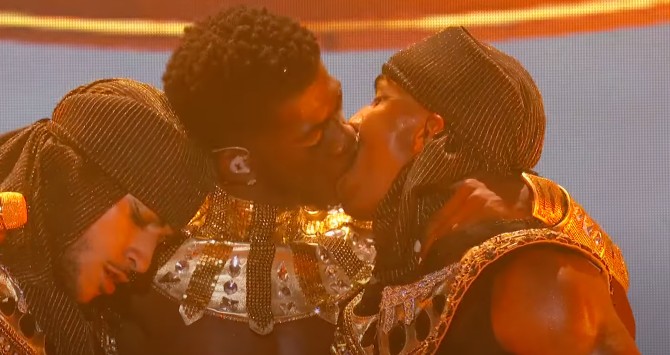 Everyone’s been talking about Lil Nas X this week after his truly epic performance at the BET Awards last Sunday.

Surrounded by a group of hunky musclebound dancers, the 22-year-old rapper performed his single “MONTERO (Call Me By Your Name)”. The homoerotic performance culminated in Lil Nas X grabbing one of the dancers and kissing him passionately on the lips.

It was the first male-male smooch in the history of performances at the BET Awards. And the crowd went wild.

Afterwards, Madonna tried taking credit on Instagram for being the first person to perform a gay kiss at a major music awards show when she locked lips with Britney Spears and Christina Aguilera at the 2003 MTV VMAs.

The post, which was meant to be a joke, ignited a major firestorm, with many pointing out that two straight women pecking each other on the lips as a publicity stunt is much different than an openly gay rapper kissing another man in front of his mostly straight peers.

Then people started reminding the pop icon of all the other times she tried taking credit for things she didn’t actually come up with and it got real awkward real fast.

Hey sis, let’s recenter the conversation back where it belongs since you couldn’t even be bothered to list ballroom legends in that song of yours #DidItFirst pic.twitter.com/3fbNGuA27T

Same-sex smooches on live TV are still a rare sighting even today, but they do happen from time to time. Scroll down for four more televised gay kisses by musicians from over the years. Mmmwah!

The American Idol alum sang his song “For Your Entertainment” at the 2009 AMAs. During the performance, he got frisky with one of his male backup dancers and ignited an homophobic firestorm. Looking back on the experience recently, Lambert said, “I was pulled off of ABC for a little while. They were freaked out. They had Christian parent groups writing in. The censors were freaked out. The thing I found so funny was like, ‘Censors? It’s a kiss. When was that indecent?'”

The Russian music duo released their international hit “All the Things She Said” in the summer of 2002. They promoted the song on pretty much every major television show, including The Tonight Show with Jay Leno, where they kissed before the cameras quickly cut away. Sadly, this particular story doesn’t have the happiest of endings because after it was revealed that neither of the singers actually identified as queer, they were accused of gaybaiting. Then in 2014, one of them revealed she would “not support a gay son” despite owing much of her success to LGBTQ people.

I see @adamlambert and @Madonna trending for walking so @LilNasX could run but it’s time to let the GOATS out!
From 1989 BRiT awards @AndyBell_info and @BoyGeorge ???? pic.twitter.com/fOPdgu2Uzy

The openly gay singers smooched on stage at the 1989 Brit Awards. Unfortunately, not many people remember it today because it was quick kiss and because the show was an absolute disaster that included several missed cues, flubbed lines, boos from the audience, a pre-recorded message from Michael Jackson that never aired. In 2018, veteran reporter David Owens, who had been tasked with covering the ceremony that night, recalled it in an essay titled “What is was really like at the disastrous 1989 Brit Awards.”