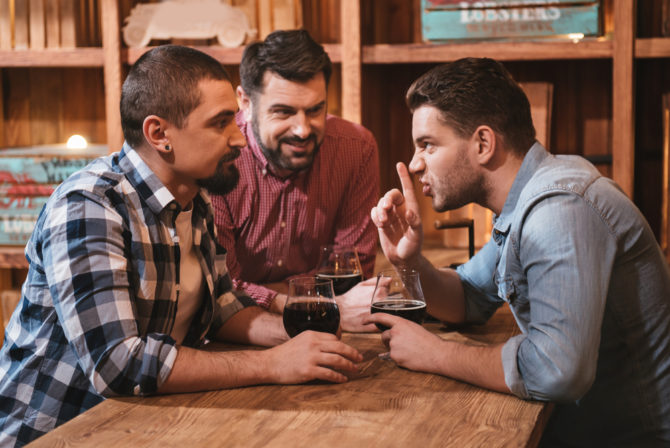 Somewhere along the way, the word “gay” went from meaning “lighthearted” and/or “homosexual” to also meaning “foolish, stupid, or unimpressive,” as the Oxford Dictionaries attest. And that third meaning really chafes one Reddit user, who asked for advice about “handling friends who constantly say the word ‘gay’ in the wrong way.”

This Redditor has a friend who uses gay as a pejorative on the regular: “Died in call of duty? Gay. Didn’t get the day off work? Gay. Don’t like the news headline? Gay.”

“It’s just not registering with him that it’s inappropriate and hurtful,” the user wrote.

Thankfully, the users of the r/gay subreddit were full of ideas. Read on for some of their comments.

“When he says it, ask, ‘And how is that gay?’ And when he answers just give him a blank look and say, ‘I don’t get it. Gay is to be with someone [of] the same sex, not that. I think that word doesn’t mean what you think it means.’ Then give him other words to use as options in that instance. If he gives you sass, just tell him you are taking the word gay back.”

Be smooth but underhanded

“I’ve had this problem and this is pretty much how I handled it with almost my entire straight friend group. I’ll just say something like, ‘And how is it gay?’ Every time, I would say something smooth but underhanded to make them think about it. They have all stopped.”

“What I did is to fake a laugh very loud, and claim, ‘You’re right! Because being gay is BAD! I just get it!’ Usually, if there’s more people around, they get the sarcasm and call the dude out on not using gay as an insult. Depends on the crowd, though, so think before doing this.”

Take them to class

“Call it out, if it does actually bother you. Teaching your own friends how best to communicate with you is how it’s done. If you truly do find his particular use of the word ‘gay’ as being hurtful and inappropriate, and (as you suggest) that your friend is unaware how this is landing, then you can take it as your own responsibility to call that out and lovingly defend yourself and teach your friend.”

“Ask ’em to produce their Gay Union Card. If they cannot produce one then they cannot use the word ‘gay’ in any way shape or form.”