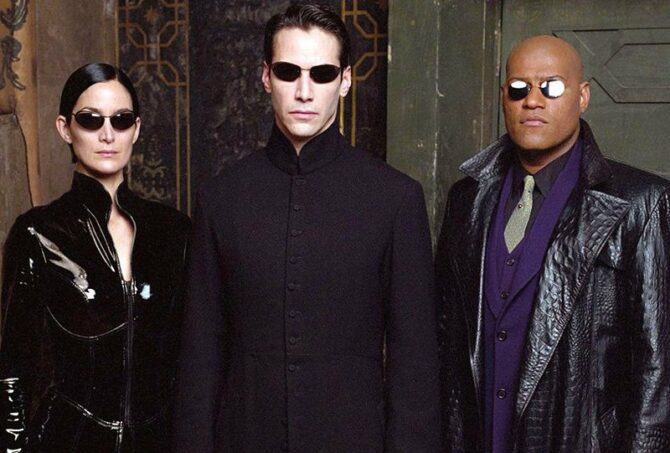 Welcome to the Weekend Binge. Every week, we’ll suggest a binge-able title designed to keep you from getting too stir crazy. Check back throughout the weekend for even more gloriously queer entertainment.

The Timely: The Matrix Trilogy

With openly-transgender director Lana Wachowski poised to send audiences back into the world of The Matrix next week (yes, we’ve seen it…no, we can’t talk about it yet), we feel its time for a refresher on the trilogy of pop culture-changing movies that transfixed audiences. Yes, we’ve recommended it here on Weekend Binge before. We hate to be redundant, but hey, we like being prepared even more.

Nobody in 1999 thought of The Matrix as a queer film.  How time changes things. More than 20 years on, the Matrix trilogy remains one of the most wildly successful franchises in film history, full of landmark effects, eye-popping visuals and philosophical science fiction. Today, it also plays as deliciously queer, whether general audiences are aware of its subtext or not. For one thing, both co-directors Lana and Lilly Wachowski have since come out as transgender women, and become vocal supporters of the LGBTQ movement. More importantly, though, the film’s themes and plot points–meeting on the internet, finding an underground, multicultural community, working to overthrow a patriarchal despot and rejecting gender mores–align so well with the state and goals of the modern queer community, it’s scary.

The original Matrix follows the basic “Hero’s Journey” outline. A loner-hacker named Neo (Keanu Reeves) makes contact with an underground group of freedom fighters, led by Morpheus (Laurence Fishburne) and the beautiful Trinity (Carrie-Ann Moss). Neo learns that the world is actually a computer simulation (the titular Matrix) run by oppressive machines that seek to keep humanity captive. Neo discovers he has special powers within the Matrix, and rises to become a hacker hero. The Matrix Reloaded takes the story in a whole new direction as Neo and company learn of an impending machine attack on Zion, the last bastion of human civilization in the real world. He also learns he’s not the first Chosen One–he’s the sixth, part of a larger plan for the machines to enslave humanity. Rather than accept his design, Neo rejects the machine plan, returning to fight alongside his friends, potentially damning humanity to extinction. The Matrix Revolutions sees the machines launch their final attack on humanity, as Neo ventures to the Machine City in hopes of ending the war, and stopping Agent Smith (Hugo Weaving), a program that has become a virus.

While the sequels The Matrix Reloaded and The Matrix Revolutions earned just criticisms on release, upon a repeat viewing the subtle philosophical and metaphysical assertions of the movies begin to make sense. Corners of the internet continue to rage over the revelation that Neo isn’t the only One, and that his function is actually to ensure machine rule rather than overthrow it. That, however, is exactly the point: to pull the proverbial rug out from under the audience, and explore the power of personal choices. The irony is that when Neo battles for humanity at the climax of Revolutions, he actually does fulfill the prophecy in the way fans originally expected: he ends the war, and frees humanity from captivity…at least, those who choose to live free.

Over the course of these three stories, the Wachowskis also correctly predicted where 20 years of human evolution would lead us: that in an age dominated by technology, the future of our species lays in consciousness itself. The mind determines personal identity more than either the physical or virtual world, and mankind must find ways to navigate both. Only through knowing ourselves can we achieve true power.

The Matrix Trilogy is a series that begs for discussion and analysis after viewing. It’s also loads of good fun, chock full of wild action and effects. Even if the alt-right has today appropriated the series’ “red pill” analogy, astute viewers of the films will know those wingnuts have it all wrong: taking the red pill means rejecting a kleptocratic, oppressive oligarchy and discriminatory social order…something we in the LGBTQ world continue to push for.

So, grab the popcorn and jack in. Prepare for the Resurrections, and a world of equality and freedom.

Note: This article contains portions of previous posts on Queerty.