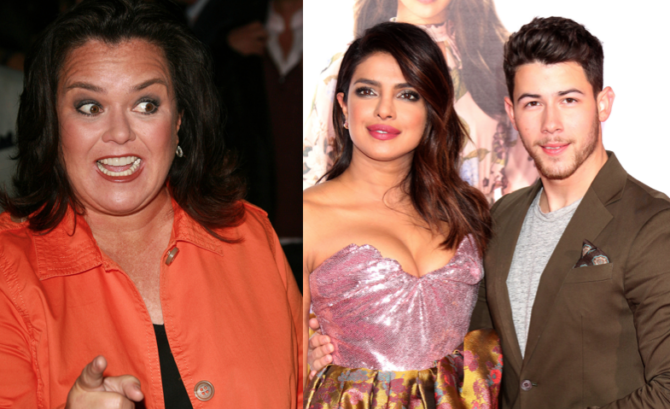 Rosie O’Donnell has issued an apology for her first attempt at apologizing to Priyanka Chopra following an awkward encounter with her and her husband Nick Jonas.

O’Donnell initially posted a TikTok video over the weekend, recounting her run-in with Chopra and Jonas at Nobu restaurant in Malibu.

In that first post, the comedian said embarrassed herself (and her son, his girlfriend, and Fran Drescher) when she approached the famous couple for a chat.

O’Donnell explained: “I just embarrassed my son and his girlfriend Theresa and Fran Drescher because seated next to us in Malibu Nobu was Nick Jonas and his wife, someone Chopra.

“Which I always assumed was Deepak Chopra’s daughter, so when I said ‘hi Nick Jonas you were great in Kingdom and hi I know your dad’, she goes ‘you do? Who’s my dad?’

“I said Deepak, and she said ‘no and Chopra is a common name.’ I felt so embarrassed, didn’t you think Nick Jonas was married to Deepak Chopra’s daughter, am I the only one who thought that?

“To Nick Jonas I apologize, and to the Chopra wife, I apologize too.”

Comments started pouring in criticizing O’Donnell for referring to Priyanka as both “someone Chopra” and “the Chopra wife,” which prompted O’Donnell to post a followup video.

In the second video, she said: “Good morning everybody, I was reading the comments about Nick Jonas and his wife Priyanka Chopra, who I mistakenly thought was Deepak’s daughter, and people thought she was rude, she wasn’t rude it was just awkward.

“I’m sure she gets sick of that, I’m sure I’m not the only one. According to the comments a lot of people thought that too, but she’s apparently a very well known actress and apparently more famous than him people are saying, so I’m sure it felt weird to begin with.

“And anyway Priyanka is her name, Priyanka, I hope I’m pronouncing that right. I just want to apologize to her and anyone who thought that it was really inappropriate of me, sorry sometimes I f**k up. I didn’t know boo.”

In the caption, O’Donnell added: “i shoulda googled b4 i tiktok ed”.