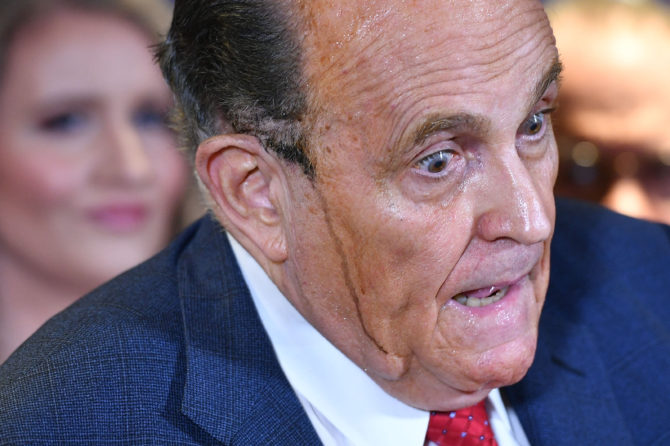 It appears Rudy Giuliani is having a little trouble paying his mounting legal bills. According to The New York Times, his allies have begun pestering Donald Trump to chip in and help. But they aren’t having much luck.

Giuliani’s advisers have purportedly reached the point of begging Trump’s team to dip into its $250 million campaign bank account and pay the embattled attorney the $200,000 he is owed for his failed efforts to overturn the results of the 2020 election.

Apparently, Giuliani has been trying to get the money for a while now but Trump, being Trump, has refused to cut him check.

After federal prosecutors raided his home and office last week as part of an ongoing probe into his shady dealings with Ukraine, Giuliani increased pressure on Trump’s camp to fork over the money.

In addition to the whole Ukraine thing, Giuliani is also ensnared in not one but two defamation lawsuits by voting machine companies Smartmatic and Dominion.

Smartmatic alleges he caused grievous harm the company when he claimed it was connected to widespread election fraud. Meanwhile, Dominion says he made defamatory statements about the company as he was spearheading Trump’s frivolous post-election legal battle.

But the bad news doesn’t stop there.

Yesterday, prosecutors in Manhattan requested a federal judge to appoint a “special master” to dig through items collected from Giuliani’s home and office last week, a sign that they are really zeroing in on him and want as many eyes on the evidence as possible.

In a letter, US Attorney Audrey Strauss argued that a special master is necessary given the “unusually sensitive privilege issues that the warrants may implicate,” referring to his work as counsel to ex-president Trump. She also said the appointment would ensure “fairness” in the investigation.

Meanwhile, his son, Andrew, has been hitting the media circuit to allege the attacks on his father are being directed by Joe Biden… Or, um, maybe by the Justice Department? …Or possibly the media! He can’t seem to decide who’s behind all this, but he’s absolutely 100% certain it’s some sort of vendetta against his dad, who is totally innocent.

Andrew Giuliani vigorously defends his father, Rudy Giuliani, saying Americans should trust his integrity as the “the greatest mayor in the history of New York.”

“I am not concerned at all because I think this is the … corruption of the Justice Department.” pic.twitter.com/DAkRxnV0M0