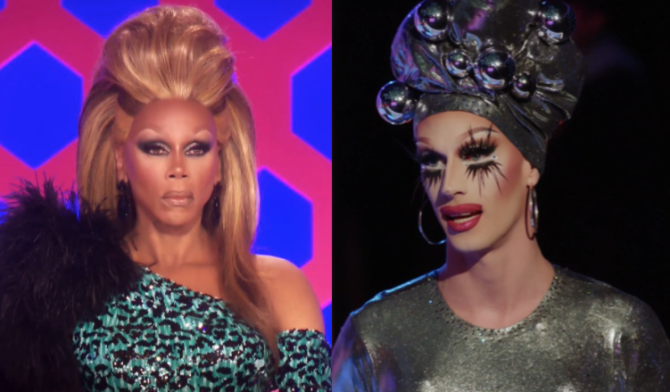 RuPaul took the opportunity to address a Drag Race Down Under queen’s racist past during the most recent episode of the show.

Before the series premiered, several past performance photos of Scarlet Adams circulated online showing the current frontrunner wearing a Native American headdress, a burka, and–most cringey–yellow and blackface. The images came to light after a fellow drag performer, Felicia Foxx, reposted them on social media.

While the contestants prepared for the runway, Adams addressed her past to the other queens.

“I’ve said and done things in drag that I regret a lot, when I was a lot younger and stupid and naive; trying desperately to make people laugh,” she said.

“I have, in the past, like a lot of other queens, done blackface before, which I really regret. I am disgusted in myself that I did those things.”

Etcetera Etcetera commented that she has a hard time buying a blackface performance is just an “honest mistake,” and Art Simone observed, “It’s strange to appropriate someone’s culture to make a joke of it.”

Adams replied: “I didn’t know any better. Not that that’s an excuse, but it’s hard to unlearn things that are engrained into you as a child.”

“I think casual racism in conversation is very different to painting your face in blackface and performing a number for money. A lot of drag scenes are extremely racist.

“I see drag queens saying, ‘It was just a joke, you need to get over it.’ But, while people of color and trans people are still facing violence every single day, from the systematic oppression that we live in, it isn’t a joke to me.”

Then after the challenge was over, RuPaul asked for Adams to address the judges directly about it.

“I can’t deny that that happened,” Adams said. “As a dumb, ignorant teenager, I made some mistakes that I’m really not proud of and everyday, I regret those decisions. I regret the fact that I used my platform as a performer to ridicule people who have faced systemic racism for hundreds of years and I’m so ashamed of the person I once was. I’m really sorry to you and to everyone that I have hurt.”

RuPaul replied: “Now, I’m sure there are people that would want me to cancel you right here, right now. But, I’d rather this be a lesson in humility and accountability, and I pray that all of us can learn and grow from our mistakes.”

In March, Felicia Foxx shared the photos on Instagram, writing: “It makes me sick to my core to see numerous people in the LGBTQ+ community who are profiting off of making a mockery and disrespecting peoples cultures. My people & our culture is not a joke for anyone, especially privileged dominating cultures to make a mockery out of us!”

Adams made an apology facing social media blowback. She had previously apologized for the drag looks in July 2020.

“There is no way to sugar-coat it, when I was a teenager roughly 8 years ago I performed in blackface/cultural appropriation. I was young and I was ignorant. I am no longer that person,” Adams said in her Instagram story. “I know I will never understand what it’s like to be a person of color, But I have been hurt before and to think that I made someone else feel that way is an unfathomable feeling.”

Meanwhile, fellow Drag Race Down Under contender Karen from Finance issued an apology for a tattoo of a golliwog doll, a rag doll traditionally used as a caricature of black people. She originally claimed to have gotten the tattoo as a memorial of her golliwog dolls growing up.