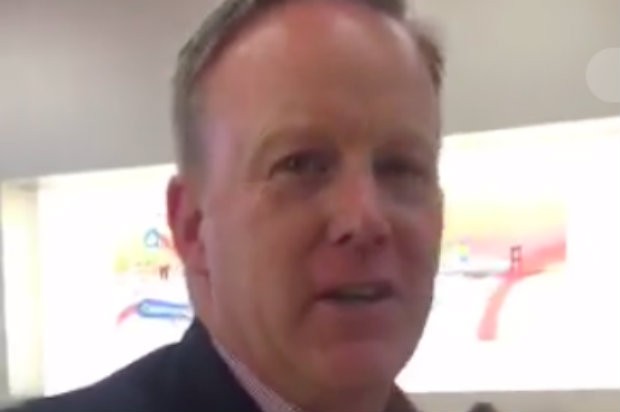 White House press secretary Sean Spicer had a rather awkward run-in with a woman at an Apple store in Washington, D.C. over the weekend.

33-year-old Indian-American Shree Chauhan was at the store to see about getting the screen on her phone fixed. All of a sudden, she looked up and saw White House Press Secretary Sean Spicer standing in line in front of her.

Chauhan immediately turned on her camera and snapped into cit-jo mode as she bombarded Spicer with questions.

“How does it feel to work for a fascist?” “Have you committed treason too, just like the president?” “What can you tell me about Russia?”

Then she posted the interaction to social media:

Asking @PressSec questions in Apple Store since he doesn't like the press. https://t.co/l493z2gG4x

Throughout the exchange, Spicer maintained an awkward smile as he tried to rush out of there. For the most part he remained silent, except to make one comment: “Such a great country that allows you to be here.”

The remark had many scratching their heads. But to Chauhan, it was clear what the press secretary meant.

“So I watched the video over and over again,” she writes in an op-ed for Medium. “And his words were clear… ‘Such a great country that allows you to be here.’ That is racism and it is an implied threat.”

“I am still stunned by the boldness of having my citizenship threatened on camera.”

Whether or not Spicer’s comment was tinged with racism is perhaps open to interpretation. But the racism felt by his sympathizers on Twitter is pretty clear:

I'm embarrassed to share the title "woman" with nasty women like #shreechauhan Liberals have lost all decency. #Shree is a Nazi bully.

Leave it to a worthless B*TCH like #ShreeChauhan @shreec to harass someone, (she's a mouthy punk) and then pull the "racism" card.

After verbally assaulting @seanspicer was she removed from your store @Apple? USVisa? #apple #seanspicer #shreechauhan pic.twitter.com/IG2jNnEQnw

In addition to all this, Spicer apologists have dug up and published Chauhan’s personal information online, including her email address and the address to her office. They’ve also begun contacting her employer demanding she be fired from her job.

“I have spent enough time with online to encounter rabid Trump supporters,” Chauhan writes. “Many of these folks see my brown skin and question my citizenship. They question whether I am here legally. They tell me to leave the country. They have told me to go back to where I came from. To which my snarky reply is often, ‘Go back where? New York?'”

Related: Kellyanne Conway says Obama may have spied on Trump through his microwave at Trump Tower