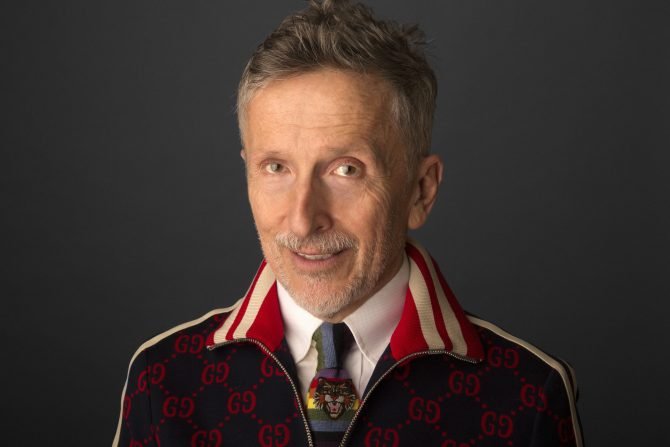 Simon Doonan may be known for his crisply tailored suits and vibrant prints, but don’t let the menswear fool you. The author and style icon knows a thing or two about drag as well.

His new book Drag: The Complete Story takes an in-depth look at the art form throughout history. With wry humor and a keen eye for its cultural context, Doonan examines drag going as far back as ancient Egypt all the way up to RuPaul’s Drag Race.

Yes, from the Pyramids to Drag Race. Epic.

As drag continues to infiltrate mainstream pop culture, Queerty caught up with Doonan to chat about his own history with wigs and frocks, his current favorite queens, and why some people seem to have such strict definitions of what is and isn’t drag.

Do you remember the first time you saw a drag queen?
Growing up in England after the war, drag was kind of everywhere. It’s such a big part of British culture. On TV there were many, many comedians who used drag—often straight guys who did comedy drag. So, I was never not around drag queens.

And then my childhood best friend—we lived in a little industrial town near London—we used to do drag together. I’ve got pictures of him and me in drag when I was 10 years old. And he became a drag queen. When we moved to London we lived together in a little squalid apartment, and he would do his drag act at various clubs, including a famous club called April and Desmond’s owned by April Ashley who was a famous transwoman who also was a drag queen. 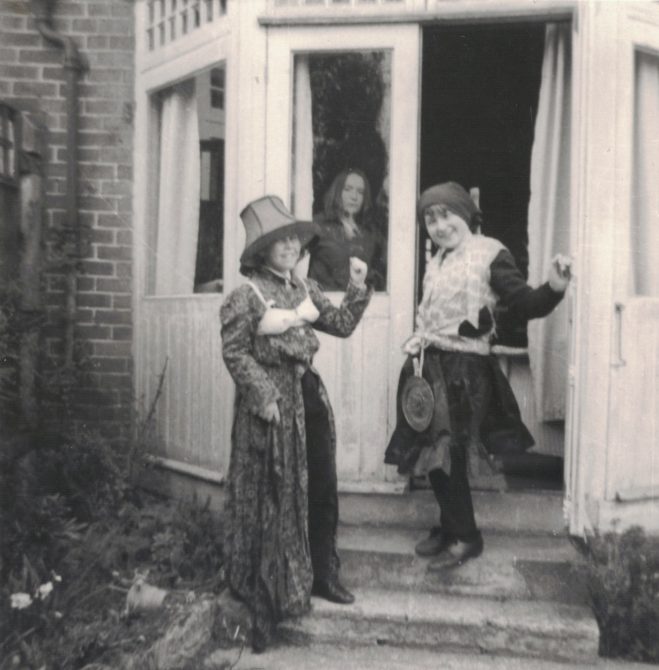 Do you remember how you felt the first time you ever did drag?
No, because it was just everywhere. I had straight friends who did drag. When I moved to London in the 70s drag was just ubiquitous. Punk rock guys would do drag. I can’t think of one of my straight male friends who I don’t have pictures somewhere of him in drag.

What do you think it was about British culture at that time that made it more ubiquitous than it was in the States?
I think in the United States, the culture is underpinned by that Puritan aesthetic. British culture is underpinned with a sort of ribald, mocking, satirical take on the establishment—making fun of Queen Victoria, making fun of female archetypes, making fun of male archetypes. Drag kings were hugely popular in England going back to the Victorian era, making fun of the patriarchy. The English impulse to make fun of the establishment often resulted in drag. Monty Python, they’re always in drag. So, it didn’t seem like that big a deal to me.

When was the last time you did drag?
Well, my birthday is on Halloween, so I often, over the decades, have done drag on my birthday. I guess as a Brit, I never thought, I’m gonna do drag. I just thought I would dress up as a milkmaid or something demented and fun. That was my impulse. 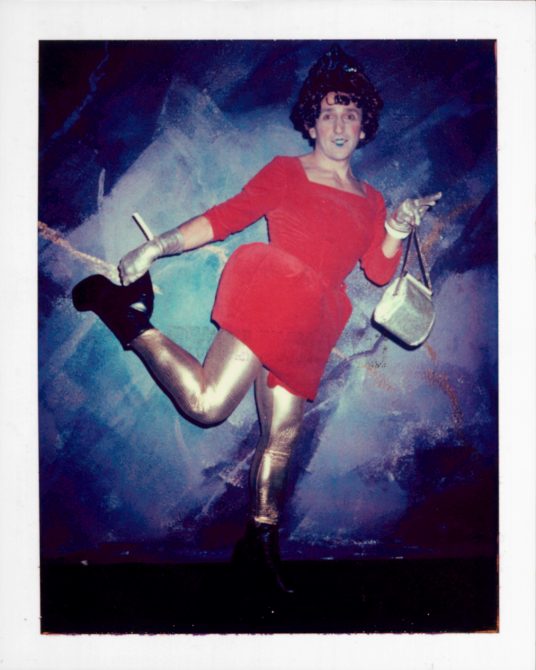 Why did you want to write this book? What did you want to add to the conversation about drag?
I’d just written a book about soccer players for a publisher in London called Laurence King. And Laurence King said to me, “Do you wanna do a book about drag queens? Because there is currently no broad, sweeping history of drag.” I said, “Let me think about it.” Because there’s no point in doing a book unless you feel that it’s the right moment. And I realized, yeah, drag is having a pretty major moment. There are many things right now in the culture that are propelling drag forward. There’s the gender revolution that we’re going through which is completely unprecedented. It’s put drag front and center. There’s the Trump bump; the politicization of drag. There the new meticulousness of drag, the new emphasis on artistic expression that you see with look queens like Ryan Burke. And then there’s RuPaul’s Drag Race, which has put drag on a global platform in a way that is, again, unprecedented. So, I thought, yeah, this was a good moment to do a history book about drag, because people are interested.

What is the biggest misconception about drag? What do people get wrong about it?
I think it’s such a rapidly evolving landscape that when I started this book three years ago it was very different. The old rules went out the window. When I started this book, I thought I had to be very careful to put kind of a firewall between drag and trans. Three years ago, that was very much the case. And all of a sudden, these preconceptions went out the window and you have drag queens like Peppermint and Monica Beverly Hills coming out as trans on RuPaul’s Drag Race. The preconceptions and the boundaries started crumbling. It’s a fabulous free for all where people can create new identities. There’s an incredible range of people who are expressing themselves and playing in this arena now.

Related: Catch all the sickening looks from RuPaul’s DragCon 2019

One of the byproducts of the success of Drag Race that I’ve found really interesting is this impulse to police the boundaries of drag. RuPaul at one point said that she wouldn’t want trans performers or cis women to compete on Drag Race. What do you think is behind that need to define drag as something for cis male performers?
In general, the people I encounter in the drag world don’t have that impulse to police other people. But I know what you’re talking about. When all the boundaries start crumbling and it becomes this fabulous creative free for all there are always gonna be people who want to set limits on things or question other people’s version of things. I think those people are probably in the minority. Most people are celebrating this incredible garden where people can cultivate their identities.

Drag Race also seems to have introduced drag to a generation of young cisgender women. Why do you think it’s so appealing to them?
I know exactly what you’re talking about. When I went to DragCon, I would say the majority of people there were [cis women]. It’s so fascinating from a cultural point of view. I guess it’s probably a result of several factors. The transformational creativity of drag is everywhere on YouTube. Many of the beauty influencers are drag queens or extremely feminine men who love to paint and present themselves in this very fabulous, glamorous, artificial way. I think women are responding to that. And we live in an age when the phrase toxic masculinity is sort of on many lips. So maybe it has something to do with a non-threatening version of maleness. I think there’s probably something quite appealing about that. 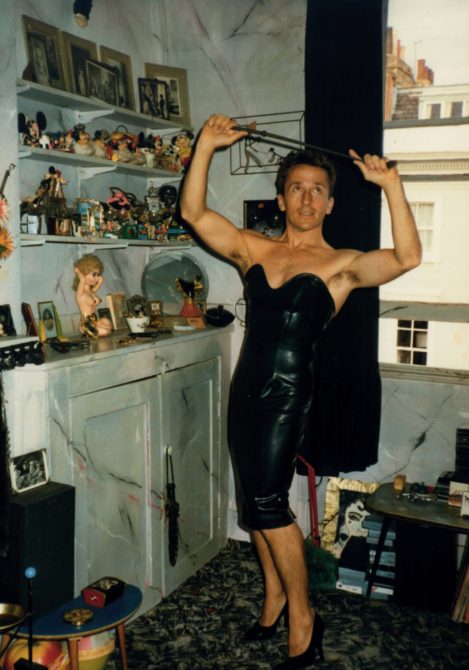 The book has a chapter on drag kings, but I was surprised not to find one on faux-queens—cis women who perform exaggerated feminine drag.
I know, that would have been great. I finished writing the book over a year ago, but it takes so long to do all the pictures and everything. So, that would have been great to include. Again, that is another part of the drag phenomenon that rapidly grew during the time that I was writing the book. I allude to it. There’s so much—today I was thinking, Oh, shit, I didn’t get Milk into the book! That’s very much the nature of doing a book, a lot of cringing after they come back from the printers.

Has there been a drag performance that you’ve seen recently that you can’t stop thinking about?
I worked with Susan Bartsch recently on Love Ball 3. Billy Porter hosted, all these incredible queens were performing. And it was my first encounter with Charlene. Seeing her perform in Gotham Hall, this glamorous former bank building, and there’s Charlene flying around with it all hanging out—it was truly a knock your socks off moment.

As you’ve said, drag is having a huge moment right now thanks in part to RuPaul’s Drag Race. But that show won’t last forever. Do you have a sense of where drag goes from here?
No, I don’t. I don’t have any vision into the future. As I say in the introduction, no one could have foreseen the moment that we’re in now where drag is such a big part of the culture.

Yeah, I think you made a really remarkable point in the intro about how everyone assumed that mainstreaming drag would mean the death of its creativity and subversion, but that hasn’t been the case.
Yeah, entirely the opposite has been true. And that’s probably because of the gender revolution that we’re in, and also the creativity of the drag queens. In the old days, you’d put on a wig and slap on some blue eyeshadow and it was a hasty process. Now, as I said, one of the things propelling it forward is this meticulousness.

Everything changes, the culture evolves, but I find it very difficult to predict where it’s gonna go. Usually, the swings are counter, so if you live in a very freewheeling, groovy period, things can get a bit rigid after that. But there’s always gonna be unconventional people at the margins who keep everything interesting and fun.

What’s your advice to someone who’s doing drag for the first time?
I would say go for comedy drag over glamor drag. To go into that glamor drag world, the bar is so high. Comedy drag, there’s a lot more leeway.

But basically there are no rules, which is a great place to be.