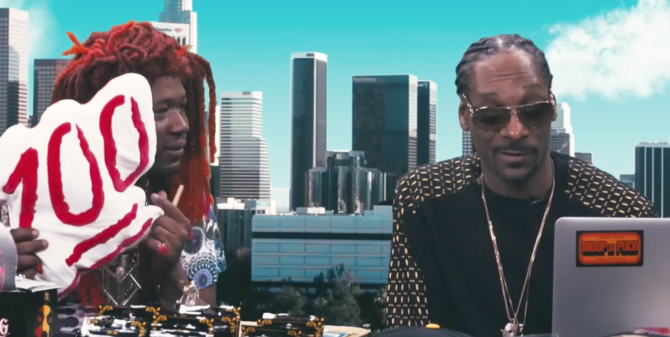 In his new video for the song “Moment I Feared,” Snoop Dogg dusts off some tired old gay jokes to see if they still have any comedic juice left in them.

Whether it’s the jokes that are objectively unfunny (they are) or it’s the delivery that lacks any sort of comedy edge (it’s that, too), the bit falls completely flat. Viewed in the best light, it’s a bad example of stoner comedy. But some have reacted to the lazy, uninformed jokes with another adjective: homophobic.

Here’s the context: In the video, Snoop Dogg hosts a mock news program. He interviews a fictional character, Fonz D-Lo, who is very clearly based on Atlanta rapper Young Thug. Young Thug is known for incorporating women’s clothing into his wardrobe, as well as his eccentric public persona. These challenges to the rap scene’s traditionally rigid gender roles have caused some to question Young Thug’s sexuality. The fact that he’s engaged to marry a woman doesn’t seem to make any difference.

In the bit, Snoop Dogg asks Fonz D-Lo if he’s gay. “Yes, I’m happy. I’m happy right now,” Fonz says. Snoop then asks him what he thinks about when he wakes up in the morning. “Cock. My annoying neighbors, they have this rooster,” he replies.

The jokes come at the 6:30 mark in the below video:

We love some good word play, but these jokes are about as fresh as the forgotten yogurt at the back of an office fridge.

Ben Beaumont-Thomas at The Guardian takes the criticism a step further, writing, “His latest – and openly homophobic – video shows just how out of touch he now is with modern rap.”

But the entire premise of the skit is that being gay is a negative, rather than anything to be embraced. And we’ve got to agree with Beaumont-Thomas that it’s a set-up that is woefully out of touch.

It’s not the first time Snoop Dogg has been accused of propagating rap’s traditionally homophobic attitudes.

In a 2013 interview — in The Guardian of all places — Snoop Dogg said that being gay may not ever be viewed as “acceptable” in the rap scene.

He was asked if Frank Ocean‘s opennes about his sexuality was a sign of progress. “Frank Ocean ain’t no rapper,” he responded. “He’s a singer. It’s acceptable in the singing world, but in the rap world I don’t know if it will ever be acceptable because rap is so masculine. It’s like a football team. You can’t be in a locker room full of motherfucking tough-ass dudes, then all of a sudden say, ‘Hey man, I like you.’ You know, that’s going to be tough.”

He followed that up by saying, “I don’t have a problem with gay people.”