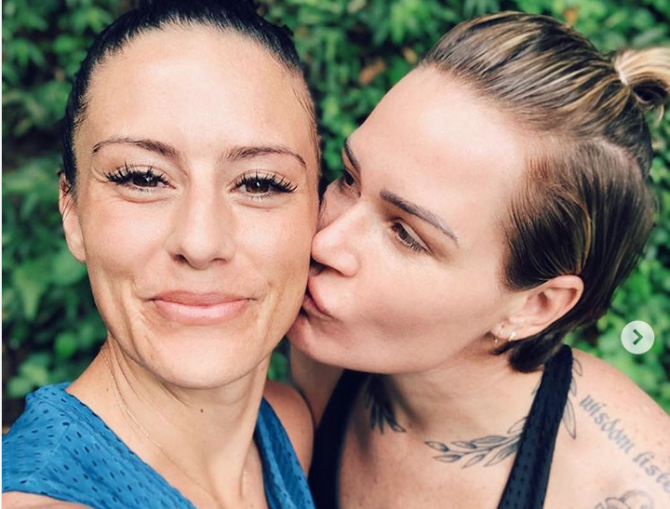 Going from soccer goals to life goals, National Women’s Soccer League stars Ali Krieger and Ashlyn Harris are engaged. The couple, who both play for the Orlando Pride, confirmed both their relationship and engagement in one fell swoop this week.

Krieger and Harris met in 2010 while playing for the U.S. National Team. “We became really close friends, and we just hung out, we clicked, and we had so much in common,” Harris, 33, tells People. “We always sat next to each other on the bus and on flights, and we kind of just talked about our dreams and our hopes and what we wanted to do one day when we grew up. Because at the time, we were kids.”

It didn’t hurt that Krieger, 34, has “unbelievable tiger eyes,” as Harris observes. “I just felt like every time she was talking, I wasn’t even paying attention to what she was saying.”

If I’m ever to leave this life early, I want to be remembered exactly like this..in your arms, under a waterfall.

Meanwhile, her new fiancée says that she was attracted to Harris’ creativity and ambition. “I find that so attractive, and the way that she makes me a better person,” the defender explains. “I think that I’m very quiet and reserved. Since being with Ash, I really feel like I’ve blossomed into the woman that I want to be, and she’s helped me become the woman I am.”

Harris and Krieger never confirmed their relationship — not wanting the romance to be a distraction for the Pride — until recently. “We became more and more confident within and ourselves and then clearly within our relationship,” Harris says. “We were like, now is the right time … and I feel like it’s a massive weight off of my shoulders. Finally, after all these years, I just feel like I don’t have to hide anything or feel like I’m not living up to the community I’m in.”

She proposed Krieger, 34, after a picnic in Clearwater Beach, Florida, this September, shortly after playing their last game of the season. “It was just us and this beautiful scenery, and I was just like … she was making me laugh, she wanted me to take pictures, and here I am. This is what I’m gonna be doing the rest of my life. It just all froze, and I was like, ‘This is it.’”

These days, the couple is getting ready for the 2019 FIFA Women’s World Cup this summer and a wedding later this year.