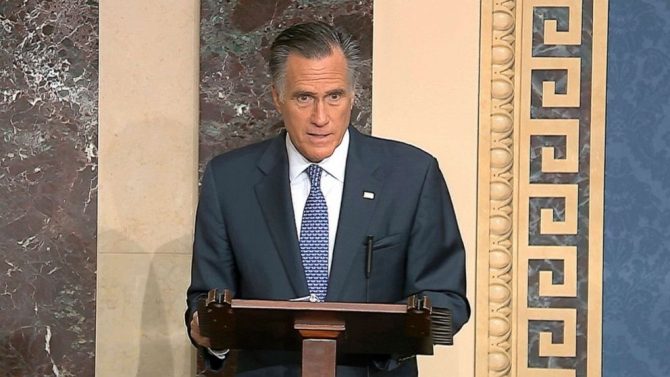 Those are just a few of the adjectives Republicans are using to describe their former party leader, Sen. Mitt Romney, after he voted to convict Donald Trump earlier today.

“The president asked a foreign government to investigate his political rival,” Romney said in an emotional speech on the Senator floor before casting his vote. “What the president did was wrong. Grievously wrong.”

The backlash from members of his tribe who, just eight years ago, wanted him to be their president, was swift and damning…

Mitt Romney is forever bitter that he will never be POTUS. He was too weak to beat the Democrats then so he’s joining them now.

He’s now officially a member of the resistance & should be expelled from the @GOP.

The original author of Obamacare, Mitt Romney, can go fornicate himself with a wire brush. That is all.

A Republican Utah lawmaker introduced a bill in the state’s legislature to recall U.S. senators like Mitt Romney.

Mitt Romney is done. Forever done. Maybe he and @AdamSchiff will share a beer at the Standard Hotel tonight.

What is everyone so shocked about? Mitt Romney is a vindictive little rat who has put himself over country every chance he’s been given. Just like he failed to be president, he failed to remove this president. Loser.

Sorry, Mitt, this is what the Left will always think of you. “Car Elevators Are The Latest In Luxury — Just Ask Mitt Romney” https://t.co/J97WM8VpDA

The one vote that's not acceptable?

Mitt Romney is a straight-up traitor

Every Democrat in the Senate is a liar and has no respect for the Constitution.

We never thought we’d say this, but… We actually feel kinda sorry for the guy!

While he may be hated within his own party, we have a feeling history will feel much differently. And that’s what really matters.

Related: Nancy Pelosi ripped up Donald Trump’s State of the Union address. And now, the memes…