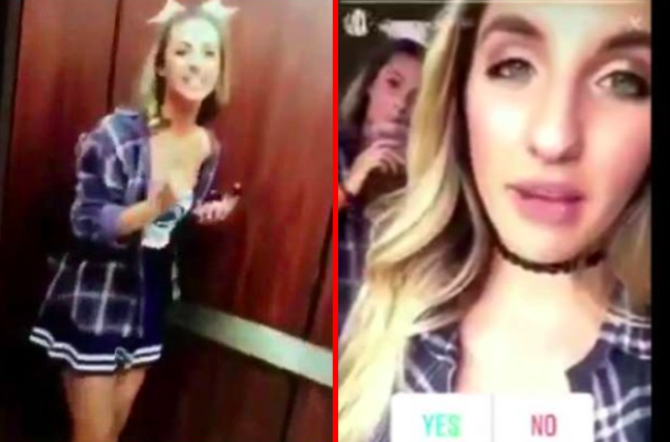 The videos were shared on Twitter by Penn State student Seun Babalola over the weekend. In them, the two Beckys, both dressed in cheerleader uniforms, repeatedly use the N-word. One of them tells people who are offended by her language to “suck my dick.”

Her name is Jasmine Barkley. This is my university. Penn State. Beyond ridiculous. @penn_state y'all already know the deal. Just do your thing. pic.twitter.com/ItUzHV38aE

Penn State responded by saying the university cannot “impose sanctions for Constitutionally protected speech, no matter how offensive,” but condemns racist messages like those expressed in the videos.

Penn State’s embrace of diversity & inclusion, and opposition to prejudice & hate, are clear. We condemn racist messages, as they are hateful and violate our institutional values. We cannot, however, impose sanctions for Constitutionally protected speech, no matter how offensive.

Meanwhile, Barkley was kicked out of her sorority. She issued a statement shortly thereafter insisting she’s “not a racist” and saying if it’s not OK for her to use the N-word then it shouldn’t be included in rap songs.

The apology was posted to her school’s newspaper’s Twitter page:

The Delta Phi Sorority also posted a statement to its Facebook page condemning bigotry and reminding everyone that the sorority “was founded by five Jewish women who were discriminated against.”

Ah yes, the old “I can’t be a bigot, my best friend is [insert minority group]” excuse.