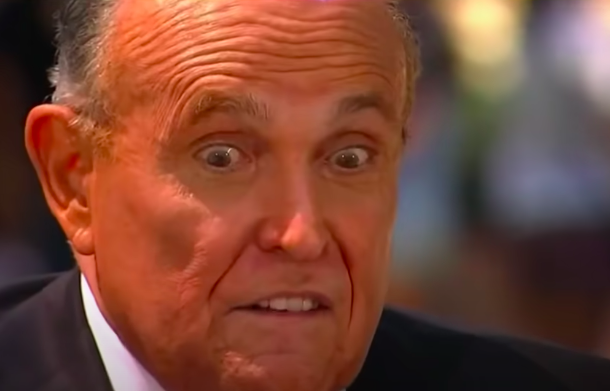 One year ago, Rudy Giuliani was riding high as then-President Donald Trump‘s righthand man. Today, he’s persona non grata in Trumpland, but he still doesn’t seem to have gotten the memo, despite being totally iced out by his former BFF.

Reports that Giuliani is struggling financially have been circulating for months. Now, The Daily Beast reports that things are even worse than people initially thought. Because he’s not just broke. He’s broke and friendless.

Apparently, Giuliani has been completely shut out from both Donald Trump’s inner and outer circles. Not only is the ex-president refusing to take his calls, but none of his former colleagues will even acknowledge his existence anymore.

Giuliani is currently ensnared in several lawsuits plus a federal investigation into his alleged illegal dealings with Ukraine.

After Trump refused to pay him for his efforts at trying to overturn the 2020 election results on his behalf, the former New York City mayor had to resort to crowdfunding to cover his mounting legal expenses, which are said to be costing him millions of dollars.

“There have been times when I’ve asked people in the [former] president’s orbit to see if Trump wanted to draw attention to the fundraising,” an unnamed Giuliani associate says. “That went nowhere. Many of these people wouldn’t even tweet or retweet [links to the legal fund] when I asked them to.”

Damn! Not even a retweet?

While Giuliani’s longtime friend Bernard Kerik, the former New York City police commissioner, has pitched in to create a fundraising site for Rudy’s legal bills, few others have been willing to even throw Trump’s former consigliere an RT on Twitter. (Trump himself can’t retweet anything, as he’s banned from Twitter for instigating political violence, but he could issue a statement of support for Giuliani’s fund and have it spread far and wide through the app.)

Insiders say Guiliani’s dwindling staff have made “several fruitless attempts” to get help from someone–anyone!–in Trumpland, but they’ve gone out of their way “not publicly voice their displeasure with the ex-president’s lack of action or financial relief.”

“We are allowed to call out the RNC and other Republican leaders,” one source says. “But not Donald Trump.”

Earlier this summer, Giuliani raised just under $10,000 to cover his legal bills on Fundly before the fundraising page vanished. He initially hoped to raise $5 million in two months.