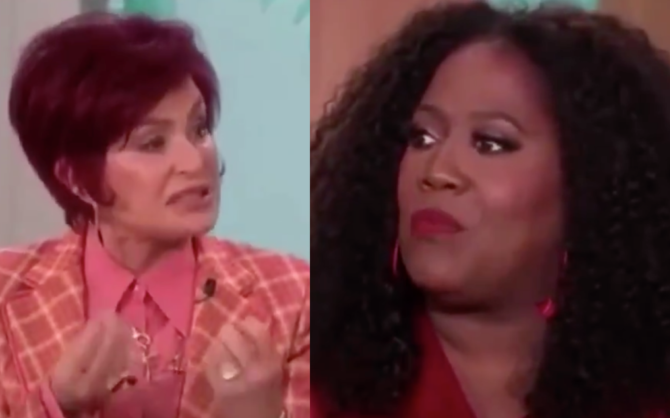 Sharon Osbourne put on quite the performance during Wednesday’s episode of The Talk, voicing in no uncertain terms that she is not a racist and neither is her friend, Piers Morgan.

Many are accusing her of gaslighting her co-hosts during the discussion, which was sparked by Osbourne’s support of Morgan’s cringe-worthy statements against Meghan Markle.

“Piers Morgan I am with you. I stand by you,” Osbourne tweeted after Morgan’s Good Morning Britain segment aired. “People forget that you’re paid for your opinion and that you’re just speaking your truth.”

Elaborating on that support on The Talk, Osbourne became increasingly emotional, even as co-host Sheryl Underwood remained calm and non-confrontational.

“Why is it that because I supported a longtime friend and work colleague for years, people go, ‘Well you must be racist because he’s racist,’” Osbourne asked.

“I support his freedom of speech. I’m not racist and neither is Piers racist. It’s a terrible, evil word to call anyone that’s not knowledge of that.”

Underwood stated that Morgan’s coverage of Markle had “racial implications,” to which Osbourne replied with hyperbole.

Related: Piers Morgan’s terrible week just got much, much worse

“I feel like I’m about to be put in the electric chair because I have a friend who many people think is racist, so that makes me a racist,” she said.

Even after Underwood cut to a commercial break to calm the waters, Osbourne didn’t let up.

“I will ask you again Sheryl,” she said. “I’ve been asking during the break. I’m asking you again. And don’t try and cry, because if anyone should be crying it should be me.”

“It’s not the exact words of racism, it’s the implication and the reaction to it. To not want to address that because she is a Black woman and to try to dismiss it, or to make it seem less than what it is, that’s what makes it racist,” Underwood said.

She added: “But right now I’m talking to a woman that is my friend, and I don’t want anybody here to watch this and say we’re attacking you for being racist.”

“I think it’s too late, that seed is already sown,” Osbourne said.

“I absolutely commend Sheryl Underwood & Elaine Welteroth for holding their composure listening to Sharon Osborne gaslight racism on #TheTalk. She made this about her when it has NOTHING to do w/ her feelings. Plus she was rude & continued to dismiss them trying to educate her,” wrote the live-tweeting account WellTheTruthIs.

I absolutely commend Sheryl Underwood & Elaine Welteroth for holding their composure listening to Sharon Osborne gaslight racism on #TheTalk. She made this about her when it has NOTHING to do w/ her feelings. Plus she was rude & continued to dismiss them trying to educate her ? pic.twitter.com/5aVlCXllSQ

“This is Sharon Osbourne, telling a Black woman not to cry and demanding a definition of racism, as she sobs over Piers Morgan who walked off his job because a mixed Black co-worker calmly challenged his fixation on Meghan Markle,” noted comedian Rae Sanni.

This is Sharon Osbourne, telling a black woman not to cry and demanding a definition of racism, as she sobs over Piers Morgan who walked off his job bc a mixed black coworker calmly challenged his fixation on Meghan Markle. White women are something else. Your tears are weapons. https://t.co/mJJ7luZ8YD

No one should be surprised by Sharon Osbourne's behavior. She has been consistently loud in her willful stupidity (about race) throughout the years.
The public gaslighting might be a new lil twist tho.

No one listened when Holly Robinson Peete called out Sharon Osbourne’s thinly veiled racism. And now it’s right here on Twitter for all to see. Believe Black women.

Me unfollowing Gary Lineker and Sharon Osbourne after they sided with Piers Morgan pic.twitter.com/5fDJ6vySzP

@MrsSOsbourne Karen Osbourne just put on display what we’ve been talking about. The weaponising of white tears, the gaslighting, the demand that a black woman educate her on a construct that upholds her privilege…and on and on.

Kudos to Elaine and Sheryl for trying to lower the temperature. They should be the ones who are angry at the way Sharon Osbourne is speaking to them. #TheTalk