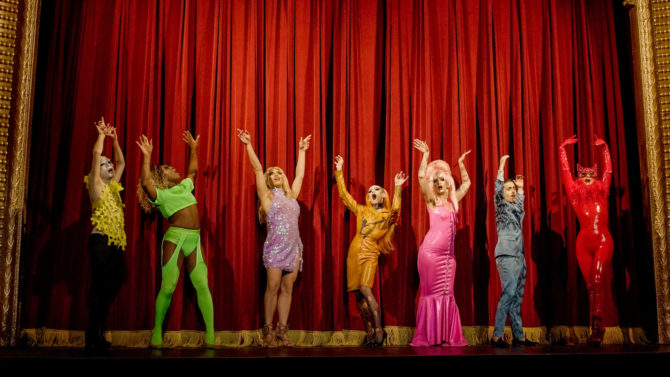 Welcome to the Weekend Binge. Every week, we’ll suggest a binge-able title designed to keep you from getting too stir crazy. Check back throughout the weekend for even more gloriously queer entertainment.

On the other hand, how could anyone remember Quibi, the flash-in-the-pan streaming service created by Hollywood producer Jeffrey Katzenberg and led by eBay creator and former California gubernatorial candidate Meg Whitman? The service, designed to deliver high-quality short-form content, launched in April 2020 before crumbling that December. (Answer: the investors who lost $1.75 billion on the venture.)

What do these two events have to do with our Weekend Binge, you dear readers ask? Quibi may not have succeeded, but that doesn’t mean the short-lived service didn’t put out some great shows. Hence this week’s title: Sasha Velour’s NightGowns. Quibi set up the show as one of its flagship offerings as it followed Ms. Velour and her merry band of drag performers as they prepare for a major performance. At its best, NightGowns channels the artistic highs of Drag Race as Sasha & co. push to elevate drag into high art with a social message. Along the way, of course, plenty of drama unfolds as the performers recount their own, personal journies as queer people, as they wrestle with the demands of a full-scale drag revue, and try to live everyday lives. It’s a fascinating–and occasionally hilarious–look into the mind of Sasha Velour, and drag-as-art.

NightGowns ran a single season of eight episodes, each not more than 10 minutes in length, making it a quick binge for sure. We recommend checking it out this weekend for several reasons we list herein. First, Roku has resurrected the show, adding it for free to the Roku Channel. Second, a second season was greenlit before the demise of Quibi last year, and we hope that firm viewership numbers might warrant Roku ponying up for a new season. And third, with pride month upon us and the COVID-19 pandemic waning, isn’t it time to get out of the house and celebrate?

Inventive, ambitious and fascinating to watch, we say give NightGowns a watch. If nothing else, it might give you a few ideas for what to wear when leaving this house for pride.

Streams on The Roku Channel.