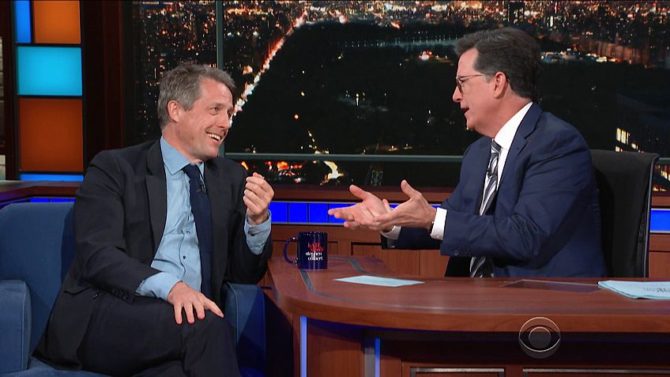 Hugh Grant is busy promoting his new miniseries A Very English Scandal, based on the real-life gay sex scandal that rocked the British public back in the 1970s. Grant plays Jeremy Thorpe, a member of the British Parliament who found himself ensnared in a gay sex scandal with a much younger man.

The 57-year-old actor sat down with Stephen Colbert at The Late Show this week to talk about the miniseries, as well as the time he watched his gay sex scene with his 89-year-old dad, Captain James Grant.

Related: Hugh Grant caught having an affair with a much younger man

“There are scenes with me entering the room–famously this all happened–with a jar of Vaseline and a towel,” Grant said. “And one thing leads to another and it’s all there.”

He continued: “I did have to watch it with my 89-year-old ex-military father. I go around on Sunday night and he said to me, ‘Now, you’re in this b*gger film. And I said, ‘Yes, that’s right.’”

“He said, ‘Well, let’s watch it.’ And I said, ‘No Dad, you’re not going to like this.’ And he said, ‘No no no, I’m a very supportive father. I want to watch it. I’ve got a television set upstairs. If you show me how to work it, we’ll watch it together.’”

So that’s what they did.

“I had to watch me with the Vaseline and the towel with my father,” Grant recalled with just the slightest hint of horror.