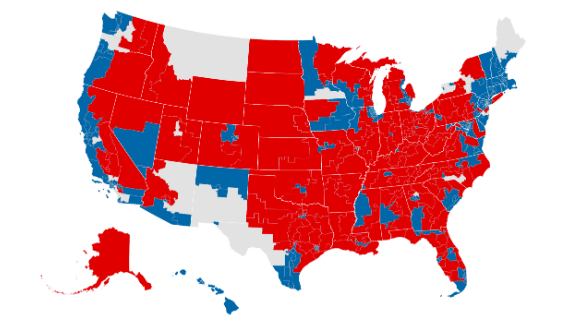 Wanna discuss the mid-term results but couldn’t follow the hundreds of races unfolding nationally? No sweat. We’ve got you covered.

Let our quick-and-dirty guide fill you in on the big details.

While Senate Republicans will still be able to rubber-stamp Trump’s many judicial appointments across the nation (ugh), putting conservatives on a path to dominate the courts for a generation, Democrats will have a bit more power to protect Mueller’s investigation into Trump.

If House Dems force votes on social issues beloved by all Americans — like protecting healthcare and increasing voter access — and then use the GOP’s “no” votes against them, they could build a serious case for 2020.

Dems made serious pickups in the Midwest, signaling a potential return to the liberal fold after a brief flirtation with Trumpism. However, the continued dominance of the Florida GOP was one of the most disturbing trends of the election.

And right now, Georgia Democratic gubernatorial candidate Stacey Abrams is fighting to ensure that every vote gets counted from her contest with Brian Kemp, a battle that has been marked by Kemp’s attempts to suppress black turnout as Georgia secretary of state.

… but we got a lot of serious pro-LGBTQ wins.

Seriously, don’t get too down, there were so many. Here are just a few of the higher profile races:

A lot of cool ballot measures won too.

Florida, Georgia, Kentucky, and Louisiana all approved Marsy’s Law, a set of constitutional amendments that offer protections for victims of violent crimes.

Louisiana voters approved Amendment 2, eliminating a Jim Crow law that allowed non-unanimous juries in felony trials. This will help reduce the number of people of color in prison.

Florida restored the voting rights of 1.5 million ex-cons, something that could help the next time a person of color runs for office, perhaps setting the stage for a Florida partisan turnaround.

Arkansas and Missouri increased the minimum wage to $12 over the next few years.