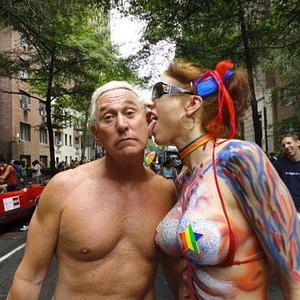 Familiar with Former Trump campaign advisor Roger Stone? He clearly reckons himself something of a transgressive naughty-pants. A lobbyist for Trump for decades, Stone earned a reputation as a dirty trickster during the Nixon Administration. He left Trump’s campaign on August 8, 2015 in a storm of controversy, claiming he quit while Trump insisted he was fired.

When word got out, Stone insisted it was a setup perpetuated by a “very sick individual,” but nevertheless, he had to resign from Bob Dole’s campaign over the ensuing scandal. Years later, he admitted to New Yorker writer Jeffery Toobin that the ads were real:

“When that whole thing hit the fan in 1996, the reason I gave a blanket denial was that my grandparents were still alive. I’m not guilty of hypocrisy. I’m a libertarian and a libertine.”

Since the new Netflix documentary “Get Me Roger Stone” strongly implies that Stone is bisexual, an interview asks him point blank whether that’s the case. Stone replies, “I’m try-sexual. I’ve tried everything.”