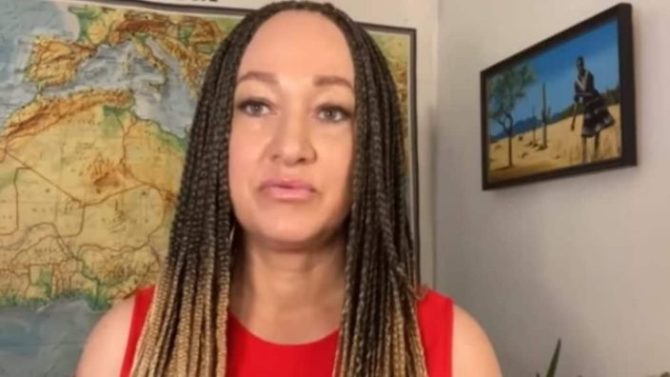 Rachel Dolezal first made headlines in 2015 when it was discovered she had been masquerading as a Black woman while serving as president of the NAACP’s chapter in Spokane, Washington. Shortly after that, she came out as bisexual and compared herself to Caitlyn Jenner, who is trans.

Since then, Dolezal has changed her name to Nkechi Amare Diallo (but she still sometimes goes by Rachel), published a book, been charged with second-degree perjury and felony theft by welfare fraud, and more or less fallen into obscurity.

Until earlier this week when she reemerged to appear on Tamrom Hall’s show to discuss what her life has been like these past six years.

Turns out, it hasn’t been great. Or even good. In fact, things have been kind of bad for the 43-year-old mother of two.

Dolezal told Hall that she’s experienced unending financial troubles after more than half a decade of being unable to land a job based on what she calls being “misunderstood.”

“I started with applying for all of the things I was qualified for, and after interviews and getting turned down, I even applied to jobs that didn’t even require degrees,” she said.

This included jobs like “being a maid at a hotel, working at a casino. I wasn’t able to get any of those jobs either.”

Dolezal went on to say that she wishes people would see her for “who” she is rather “what” she is: “A mother, an activist, and an artist… that’s really who I am.”

“When it comes to race and identity, I’ve always identified racially as ‘human’ but have found more of a home in Black culture and the Black community, and that hasn’t changed.”

To make ends meet, Dolezal has had to take odd jobs here and there, but it’s been “tough for sure.”

“Not having a job for six years, having to create my own job and find my own ways to provide for my children through braiding hair, through grant writing to bring funds into marginalized communities and Black-owned businesses and non-profits, through painting, through doing pep talks on Cameo.com.”

“It’s definitely been a long six years,” she continued. Then she added, without any hint of irony, “I really strongly believe that as a person, you have to just continue to be who you are. And you can’t change who you are.”