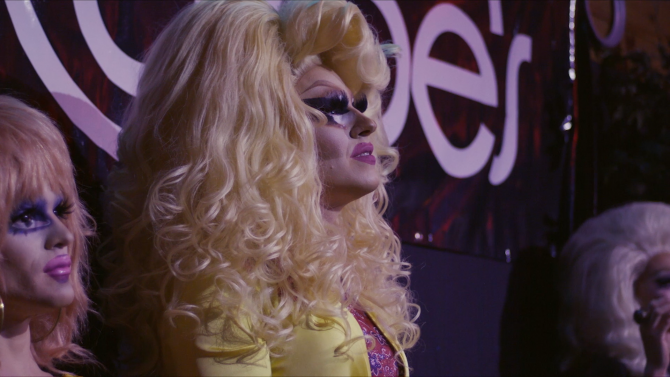 “I’m wondering who, on the other end of this call, is going to have sex with me?”

Brian Firkus–better known as her drag persona, Trixie Mattel–blurts out the words as I answer the phone.

“It’s part of my job as a journalist,” I tell her.

She proceeds to tell a story about trying the same joke with the BBC. They didn’t quite appreciate it as I did.

Mattel’s sense of comedy and drag fashion, of course, earned her a reputation as one of the best drag performers in the world. After competing on RuPaul’s Drag Race Season 7, she returned to the show for Drag Race All Stars Season 3, where she took home the crown. Since then, she’s launched a successful–if ironic–career as a folk singer/songwriter, releasing two albums. She also co-hosts The Trixie and Katya Show, with fellow Drag Race alumni Katya.

This month, Trixie Mattel launches her highest-profile project to date: the documentary Trixie Mattel: Moving Parts, directed by Nick Zeig-Owens. The film follows Mattel on her world tour promoting her album One Stone, shedding light on her troubled upbringing, her career obstacles, and her devotion to performance.

You must be so excited for the opening. Tribeca is a huge deal. How are you coping?

I think that, to be honest, I’m not of the film world. My favorite movie is Jawbreaker, so let that sink in. But what I mean by that is Nick & David, the director and producer of this film, early on had to tell me what their goals were, and tell me what Tribeca is. They had to explain it all. It’s pretty cool. As somebody who used to lip sync at night in a bar with 10 people for singles, this career continues to...what?! There are so many moments in this documentary where I didn’t realize how amazing something was until I watched it. Me in a wig doing that? It’s crazy.

And to be flying from the ceiling…

With your shoes scotch taped on.

Scotch taped on with no eyebrows. Yeah.

So how did you get hooked up with Nick?

Nick actually went to NYU with David, and they studied film and lived together. When David and I discussed the film, he was like “There’s this filmmaker I went to college with.” He described Nick as so talented it’s almost annoying. And I thought that sounds like my person. Nick, what he’s good at, is painting a picture of people on and off screen. I think that the spirit of this film is: This is the 23 hours of the day where you’re not on stage. It’s not all champagne and runways. You’re a man pulling suitcases of wigs across the country. 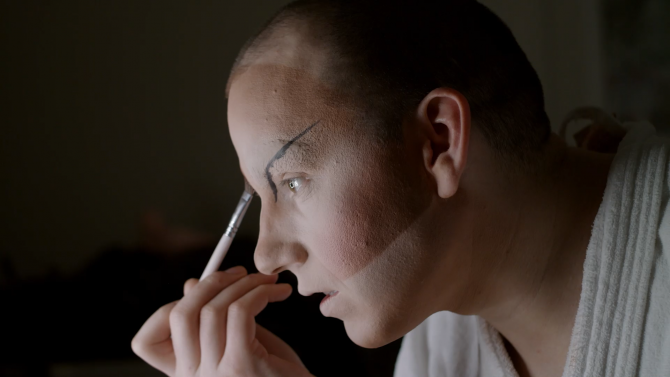 What reservations did you have to something that was going to be so penetrating to your personal life?

Thank you for using the word “penetrating.” To be honest, I’m a drag queen. So the beginning of the process I was like, This is a huge year. I wanted to make sure there was going to be a record of it. The process to me was like I’m a drag queen, and you want to make a movie about me? Let me put on some make-up. But when you watch the film, you realize…I guess the word is somber. The movie imparts the good and the bad of last year.

Totally. I was really surprised by your passion for folk music. I don’t know of other drag queens that perform folk songs.

What is it you love?

I think that folk and country music is very emotionally intelligent. I think there’s a saying in folk music that goes “Gimme three chords and the truth.” Meaning the music doesn’t have to be structurally complex, it needs to be emotionally complex. And I guess I’m obsessed with the depth and range of storytelling in that very simple style of music. Music that’s simple to listen to, but emotionally complex to digest. As someone who does stand-up dressed in a fabricated persona, I love that. It pairs really well with stand-up, which is also storytelling.

What’s more satisfying for you, playing music or performing comedy in drag?

I really love doing comedy. I went to college for music, but after college, [I thought] I’m a white guy with a guitar. I’m not that special. So music became more of a hobby for me, which I love. Then I was doing drag and lip syncing and hosting and telling jokes. Then when I started combining the two, there was like, this light bulb went off. I’d never done music in drag because drag queens don’t play guitar. And then one day I was like that means you should do it. I guess with Trixie, whenever I’m honest I get more success, whether it’s jokes or storytelling or musically. My music comes from a really honest place, and with stand-up, those deep, dark jokes are all rooted in truth. It’s a good pairing.

This film really defied my expectations in that it was less about bitchy outrageousness than the woes of being a performer. It’s not your standard dragumentary—I don’t know if that’s a term, but it should be. It’s actually, I think, a remarkable portrait of artistic will. Was that something you had in mind when you began?

I’m a drag queen, so I’m a creature of vanity. When the film was pitched to me, to be honest, I was like this is going to be about how awesome I am. Any celebrity documentary kind of ends up being a commercial. This documentary is much more of a—it’s a lot more real. It’s the highs and the lows. I think there are a lot of moments [that shows me as] a person who doesn’t have answers at any given moment. Not in a bad way, but in a way that when the audience leaves, I’m just some guy in a wig handling my sh*t. It’s not like I’m always in the best lighting. I didn’t edit the film, and I didn’t shape the story. I’m a drag queen, so if I was in charge of the editing, I would have been like can we get concealer on that moment? Can we get a corset on that scene? I think the version of the film that’s showing [at Tribeca] is a lot more objective. It’s somber. 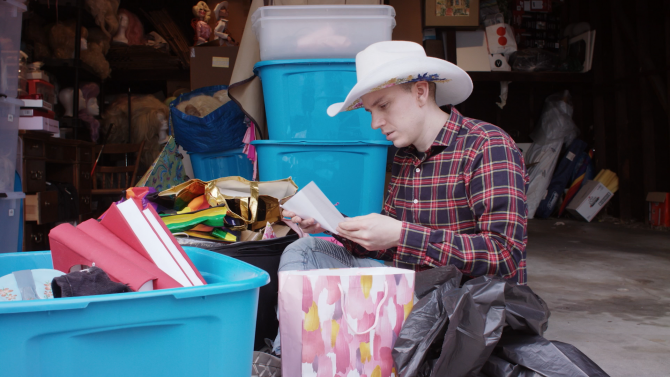 It is somber in places. It’s very real. Obviously, there are some really difficult scenes that are hard to watch. Scenes with Katya having her mental health problems. Did either of you know what was happening before it all just exploded on camera?

Well early on in the process, I realized that that was something that was really a shaping thing last year.

It was hard to take out of the film because it was a cloud that was following me for months. Early on in the editing process, I sat down and watched it with Brian and our management. And all of us sort of had the same feeling, which was it’s uncomfortable to relive, but more importantly, that’s how it felt in the room. It’s told in a very honest way. No matter what media I work in, it’s never been in my style to cut out what’s uncomfortable. Think of how many gay people are much more susceptible to depression or drug abuse. Editing out, and not talking about it, is part of the problem. I think it’s important.

It helps that Brian and I are in Season 4 of our show. In the same documentary, you see us at our worst, and then a few months later, he’s backstage at my show. We’re at DragCon together. So obviously, it ends in a really positive place. But it was uncomfortable to watch again. It was one of those days on set where I was like, if I never have to relive this again, I’ll be so happy. And then, guess what bitch? You do relive it. You relive it on screen. But for Brian and I, it was important that when we watched it, that was what it felt like. When you watch it, you feel like you’re in the room.

You recount some stories in this film that are really upsetting; the stories of your Mom’s boyfriend calling you Trixie and pulling a gun on you are particularly harrowing.

That bothered me too. I actually don’t talk about that stuff. I don’t identify as a victim. And I pride myself on being somebody, that when I talk about my origins, I was born at 18. That’s all you need to know. But, if I was ever going to talk about it, I’m glad it on film. 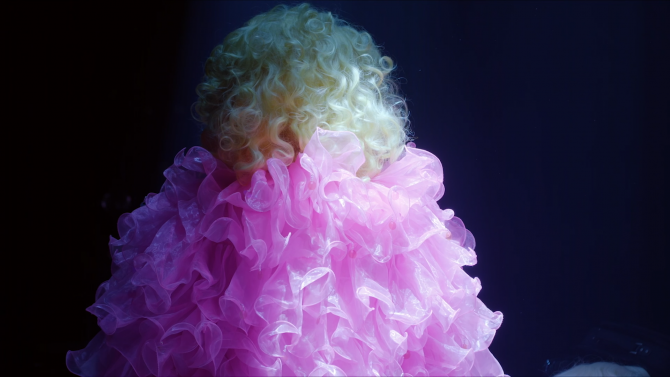 It adds important context to developing you as a character in the film. But did your family know all this before the film?

You know, my family doesn’t really watch me or listen to my music or watch me on TV. [My mom] would be more upset about the scene where I’m paying her bills. You know how no mom wants to taken care of? But then watching it back, I’m really proud that I’m in a place where I can call up my mom and she can say “I’m in trouble” and I can help her. I think that’s really prideful. I clearly came from literally nothing, so I’m proud of that. I don’t think my mom will love that section if she does watch the movie, but it’s sort of like Katya. My mom and I have conversations about [Trixie’s abusive childhood]. I’m not a grudge holder. I’m not mad. She’s not mad. I’ve forgiven her for all of that. So again, it’s like sometimes not talking about things is the greater evil. But I don’t look forward to watching that in the theatre.

Ok, last question. I have a really dark 5 o’clock shadow. What tips do you have for getting a smooth face?

Too dark? I would say you have to shave in the shower. You have to use a new razor per week. Or, you know Latrice Royale? She uses a depilatory cream, almost like a Nair. But if you have sensitive skin, that may not work.

I have crazy sensitive skin.

Ok, don’t do that then. Think of how many gay guys Nair their butt and they’re fine.

I’ll be thinking about it now.