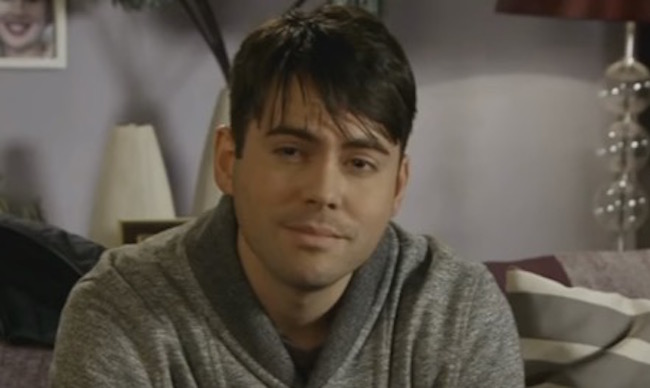 He played Adam Mitchell on Doctor Who with little difficulty.

His turn as Eric the Milkman on Halal Harry came and went, and he somehow managed not to hurt anyone in consequence.

Narrating the children’s book Horace evidently sat well with him.

But the pressure of playing Todd Grisham, the first openly gay character on Coronation Street, proved too traumatic, so actor Bruno Langley went out on the town and sexually assaulted four women.

According to The Daily Mail, the actor molested four different women at a music venue in October. He’s been charged for two of those attacks.

Langley wept in court as he learned he’d be avoiding jail.

Related: Man recounts violent sexual assault after waking up from an overdose at a party

“Something happened that night,” his lawyer said aptly, “most possibly in relation to the character he was playing.”

The inference here is that Langley felt out of his comfort zone for being heterosexual and playing a gay character, and he was hoping to… reassert his masculinity?

The incidents occurred late at night in the Band on the Wall Club in Manchester, UK.

In lieu of a jail sentence, the actor was ordered to complete 12 months of community service and issued a curfew.

His name will appear on the sex offender registry for five years.

According to the judge: “On that evening your conduct was quite disgraceful and degrading. Both of the victims would have been extremely shocked and upset as a result of your conduct.”

“The fact that you were heavily intoxicated is not mitigation, it is a further aggravating feature.”

The judge suggested Langley is unlikely to work in television again.

According to testimony, a “clearly intoxicated” Langley grabbed a woman “in the crotch area over her dress.”

Prosecutor Karen Saffman quoted a statement from the victim: “He grabbed me. Properly grabbed me. It was a rough grab. Lots of pressure… even though it was through a dress and tights.”

“She was clearly in shock. She was thinking about hitting him. She said, ‘Did you do that on purpose?’ But he did not reply.”

One of Langley’s friends apologized for the incident.

In a statement, Langley expressed remorse: “I sincerely apologize to the people involved and affected by my disgraceful behavior on the evening of 30th September.”

“I have absolutely no memory of what happened because of excessive alcohol consumption and it was for this reason that I behaved completely out of character.

However, I take full responsibility for my actions that night.

Since this incident I have been dealing with, and confronting, some personal issues that I have never addressed, and I am also getting help for an alcohol problem, so that this does not ever happen again.’

A second woman claims Langley touched her “boobs and her bum”.

Simon Hancock, the actor’s lawyer, opined, “Clearly, this is an isolated incident, something that happened on that evening. It is alcohol-fueled.”

‘The court could see it in isolation, rather than a serial predatory groper.

The issue being, this is clearly a man who has alcohol issues, his behavior clearly crosses a barrier where he touches females.

He did not target these females, and he did not fuel them with alcohol.”

District Judge Hadfield said: “The victims were shocked and upset by your conduct. You have lost your good name and employment and it may well be difficult to gain employment in entertainment in future.”

Langley also released a statement before the charges: “Sadly, I will no longer be working on Coronation Street. Acting on the show has been the fulfillment of a personal dream.”

“Playing the role of Todd Grimshaw since I was 17 years oldh as been a huge part of my life, and an absolute honur.

‘I would like to thank all of my friends who work on the show for their love, friendship and support during this extremely difficult period.’

His contract reportedly ended on October 26th as a result of the allegations.