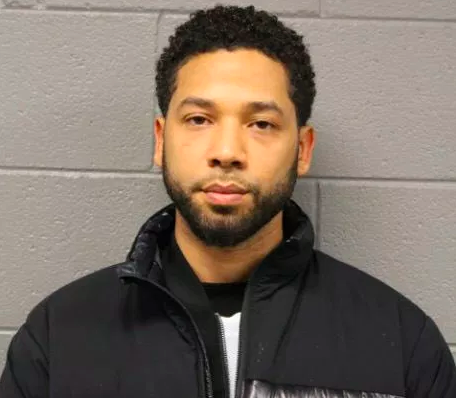 Actor Jussie Smollett turned himself into police this morning after a grand jury determined he faked his own hate crime in Chicago last month.

During a press conference earlier this morning, Chicago Police confirmed that Smollett turned himself in at around 5 am Thursday morning. He faces a Class 4 felony charge, which carries a punishment of up to 3 years in prison, for disorderly conduct in falsifying a police report. A bond hearing is scheduled for later today.

Police say Smollett paid two men $3500 (by check!) to stage an attack against him because “he was dissatisfied with his salary” on Empire. Evidently, the $20,000 per episode he receives wasn’t enough for the 36-year-old actor.

Related: Memers are coming for Jussie Smollett and it’s all getting very uncomfortable

“Smollett took advantage of the pain and anger of racism to promote his career,” Chicago Police Supt. Eddie Johnson said at the press conference. “This publicity stunt was a scar that Chicago didn’t earn, and certainly didn’t deserve.”

Meanwhile, Smollett’s attorneys issued a statement reminding everyone that he is innocent until proven guilty.

“Like any other citizen, Mr. Smollett enjoys the presumption of innocence, particularly when there has been an investigation like this one where information, both true and false, has been repeatedly leaked,” the statement said.

"Jussie Smollett can finally breathe a sigh of relief – his attacker has been arrested!"

Me at Jussie Smollett pic.twitter.com/JS60sOlHww

He made around $20,000 per ‘Empire’ episode. There’s better ways to ask for a raise without committing a felony. Just saying ?

Jussie Smollett is the exception that the right wing will make the rule.

"dissatisfied with his salary" #JussieSmollett pic.twitter.com/zdEtV9KYzN

The level of damage that Jussie Smollett has done for real victims of brutal hate crimes is nothing short of shameful and he should be held accountable for it. No one is to blame for his actions but himself. Incredibly disappointing of how this saga has unfolded.

The black community and the LGBT community to Jussie Smollett. pic.twitter.com/rc1gkFvt8J

If in fact Jussie Smollett fabricated his story, the lesson learned is not that false allegations occur – we knew that – it’s that when taken seriously and investigated properly, they are usually found out.

You don't have to feel bad for supporting Jussie Smollett in the beginning. People have lost their lives to racism, hate crimes and homophobia and the decent thing to do is to show them love and support. You did what was human and right – listening to victims.

Actor Jussie Smollett in custody when the police ask him if anyone else was involved ??? #JussieSmollettIsOverParty #JussieSmollettHoax pic.twitter.com/mBv03MBHyK

Related: Jaboukie Young-White on Jussie Smollett: “If he wanted attention, he should have just leaked his nudes”