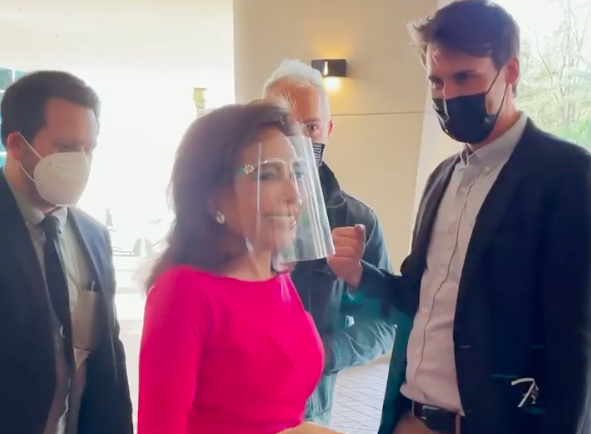 New video of Fox News host Jeanine Pirro being confronted by two men pretending to be fans is circulating on social media and it’s both LOL funny and awkward AF at the same time.

Jason Selvig and Davram Stiefler (a.k.a. The Good Liars) are a comedy duo that trolls rightwing extremists, antigay politicians, and hate groups by pretending to be them.

They first received widespread attention when they posed as investment bankers protesting the Occupy Wall Street movement. Since then, they’ve also gone after Chick-fil-A, Scientology, The National Organization for Marriage, and the NRA, just to name a few.

Judge Jeanine was their latest target. They just released video from when they caught up with her in Orlando, Florida during CPAC and asked about the “Stop the Steal” movement.

“One more riot and we can do it!” Stiefler says.

That’s when Pirro stops and tells him that, no, there shouldn’t be anymore riots.

To which Pirro, realizing she was just caught in her own lie, replies, “Did I say that?”

Here’s another video from that same encounter. In it, the guys ask Pirro about whether she ever gets drunk before going on the air.

“I watched you one time and you were slurring your words a little bit,” Stiefler says.

“I was never slurring my words,” Pirro replies.

Last year, Fox News had to put out a statement saying Pirro wasn’t drunk when she arrived 15 minutes late to her own show, which was being broadcast from her home, and appeared out of sorts.

Not only was she disheveled, but her face was blotchy and red, she was slurring her words, and, at one point, she appeared to fall asleep during an interview.

It’s like every time they come back from commercial, she appears more intoxicated pic.twitter.com/VOVPfJx4yl

While you’re here, check out a few more videos of The Good Liars confronting rightwing extremists…