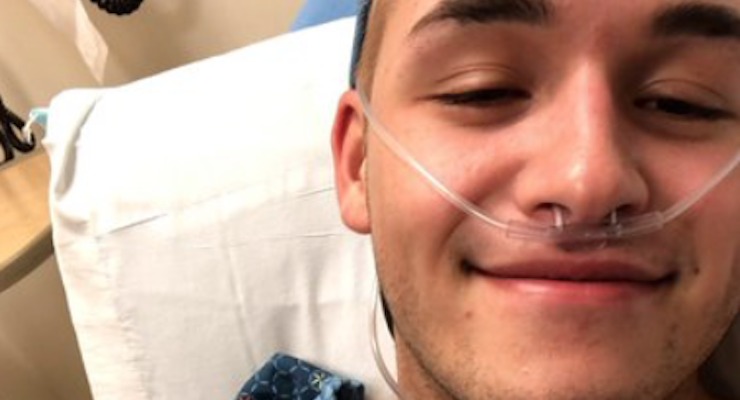 Fredy Alanis, the 19-year-old teenager who wound up in the hospital after sucking another man’s 10-incher, gave his first ever radio interview this past Saturday on The Adam Sank Show.

Some of the things Alanis revealed during the interview was that the man was both long and thick, and he did go back for seconds after he was all recovered. He also explains that the medical term for the trauma caused by the sucking is “Pneumomediastinum.” It’s very serious, and he could have died.

But we’re more curious about his sudden claim to fame, and what’s happened since the article went viral almost one week ago.

For starters, his parents aren’t happy with his viral fame, and it’s partially because he was misquoted in the article. “It’s really impacted my personal life as far as it comes to family life, because my parents are super upset about it,” Alanis explains. “They are still upset about the article.”

“It’s because when, in the article, they quoted my calling myself a whore. They asked if my family knew I was gay and I said, ‘Yes, but they don’t know I’m a whore,’ is what the article said but that’s not my words. What I said was, ‘Yeah, they know but I didn’t tell them about the situation because I didn’t want them to think that I’m a whore, you know?’ I don’t want them to think that I was going around whoring around.’ They completely twisted my words.”

Alanis adds, “I think [my mom] will always be upset about the article, but it just kind of something that is out there now and there’s nothing you can really do about it now.”

But that’s not all. His sister has received threats from trolls, telling her that she should tell her brother to kill himself.

“One of the things that has upset me the most, my sister has been getting so much backlash for this,” Alanis says. “She has people texting her and messaging her, saying, telling her to tell me to kill myself.”