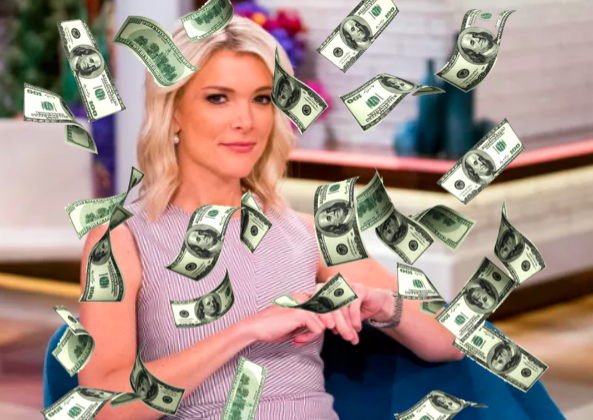 The battle between Megyn Kelly and NBC execs rages on…

As you may recall, 47-year-old Kelly was abruptly fired from the TODAY show last week after making racist comments defending blackface. Since then, she’s been negotiating her departure from the network.

Now, the Daily Mail claims those negotiations have turned into “all out war”, reporting that Kelly “is looking to get her $69M payout PLUS a $10M bonus in exit package” after she claims NBC “destroyed her career.”

OK, first, NBC didn’t “destroy” Kelly’s career. She did that on her own when she decided to defend blackface.

And second, we’re pretty sure a white woman being fired from her job for saying racist things and still walking away with $69 million plus an additional $10 million is the textbook definition of white privilege.

Kelly’s attorney, Bryan Freedman, has been negotiating the terms of her separation from NBC for a week. The discussions have hit a snag over the language in a joint statement that would announce Kelly’s departure from NBC News, according to two people familiar with the deliberations.

Their disagreement centers on how much emphasis should be placed on Kelly’s blackface comments. People close to her allege that Kelly’s comments, for which she apologized on air, are mostly being used as an excuse for the company and NBC News Chairman Andy Lack to get rid of Kelly, whose show had floundered.

Freedman put out a statement this week in response to the Daily Mail story accusing NBC of leaking negative stories about his client:

Despite my efforts to handle this process confidentially, NBC News is allowing the media to run with completely false and irresponsible reports that disparage Megyn by erroneously claiming she has ever asked for more money than her contract requires. If NBC News is not the source then they have a responsibility as a news division to correct these false claims. Or are they somehow attempting to use these fabrications for some fictitious advantage in the discussions we’re having? If Andy Lack has lost control, my hope would be that Steve Burke can step in and not permit blatant lies about our discussions to remain uncorrected.

Meanwhile, Kelly has taken to Twitter to play the victim, claiming that since her firing from the TODAY show, she and her family have been hounded nonstop by the paparazzi:

1 of 2: For a week paparazzi has been lurking outside my home day & nite. Finally today I took my kids to school. I went out alone 1st, offered them donuts &begged them to just take their pic of me & to leave my kids alone when they emerged. All were nice. Except the Dailymail…

2 of 2: The DailyMail 1st published photos of my husb IN OUR HOME & then *did* photog my kids, trailed us to my daughter’s school, & secretly videotaped my 7-yr-old child (her classmates too) & posted it. THIS IS NOT RIGHT.

A spokesperson for NBC News issued a statement in response to Freedman’s remarks, saying: “Unlike Mr. Freedman, who has repeatedly commented to the media throughout the negotiations, we respect the confidentiality of the process, and will have no comment until it reaches its conclusion.”