The Must: Breaking Fast

One of the most delightful films of 2020 finally gets a wide release. Director Mike Mosallam’s romantic comedy stars Haaz Sleiman as as Mo, a gay Muslim doctor getting over the breakup with his boyfriend. When he meets the handsome Kal (Michael Cassidy), his passions flare. There’s just one problem: during the month of Ramadan, sex is forbidden. Mo finds himself torn between his faith and his feelings for Kal and begins to ask himself: is he using his faith as an excuse to avoid intimacy?

Breaking Fast benefits from assured direction by Mosallam, and from a charismatic leading performance by Sleiman. The latter, in particular, proves himself a charming and effective leading man. It’s a must for fans of rom-coms, or anyone craving a movie both queer and refreshing.

The hit horror-comedy lands on VOD this week. Openly gay director Christopher Landon (son of actor Michael Landon) fuses the best elements of Scream with Freaky Friday. Bright teenager Millie (Kathryn Newton) does her best to navigate her final year of high school when she becomes the target of the infamous serial killer The Butcher (Vince Vaughn). Just when she’s about to become The Butcher’s latest victim, an ancient curse causes the pair to swap bodies, leaving Millie trapped in the skin of a middle-aged man, and The Butcher poised to murder all the teenagers in town. Millie and her two besties (Misha Osherovich and Celeste O’Connor) must race against time to reclaim her body and defeat The Butcher before he kills again. Freaky walks a very fine line between outright horror and comedy, though the latter genre tends to shine through. Vaughn and Newton both give winning performances, though, for our money, Osherovich—as Millie’s gay friend Joshua—is the most fun. Wacky and weird, Freaky has an undeniable charm, not to mention an absolutely fabulous queer streak.

A reader tipped us off to this new digital series about a would-be influencer Lola (Lola Lorber) and a failed gay comic Drew (Drew Lauch, who created the series) trying to raise a child together. Of course, the pair use said tyke more as a prop than a living person, which leads to Absolutely Fabulous-style hijinks. Much as with Pasty & Edina, viewers may have a hard time stomaching some of Drew & Lola’s more vapid qualities (and they are legion). That said, young Jonah Schwartz, as the kid in question, is so damn adorable, he manages to offset the caustic personalities of the two leads. Loaded with humor of the darkest variety, Sugar Baby represents the latest indictment of millennial narcissism and comes in bite-sized 7-minute episodes, suitable for snacking or as a meal.

The Romance: The Strong Ones

This queer, Chilean romance arrives on streaming services this week following a triumphant festival run that saw it take home the Grand Jury Prize at Outfest last year. The Strong Ones tells the story of Lucas, (Samuel González) a student on the brink of leaving Chile to study in Canada. When he takes a trip to visit his sister in a small, seaside village, Lucas feels an immediate passion for Antonio (Antonio Altamirano), a handsome young fisherman in the village. Sparks fly between the couple over the course of a few short days and amid a festival celebrating Chilean independence. Despite facing homophobia from their fellow villagers and even Lucas’ family, Antonio & Lucas steady one another with their affection, which begs the question: should Lucas stay? Or should Antonio leave with him? Featuring breathtaking photography, director/writer Omar Zúñiga Hidalgo crafts a sensual story, in which even the slightest, lingering look indicates a passionate yearning. Gonzalez and Altamirano have electric chemistry and both give charismatic performances—enough so that we hope they speak English; they have real Hollywood potential. Make no mistake: this is a sexy story, one which lovers of drama and romance alike can enjoy.

Fans of science fiction should rejoice in the return of Snowpiercer, the series adaptation of the cult film—one of the best of the past decade. As with the movie, Snowpiercer follows the last vestiges of humanity (including a few LGBTQ folks) who must survive on a train after an environmental cataclysm causes the world to freeze. Season 2 picks up following a revolution on the train which has deposed conductor Melanie (Jennifer Connelly) joining with the revolutionary Andre (Daveed Diggs) to abolish the class system on the train and establish democracy. Their efforts are hampered by the return of Mr. Wilford (Sean Bean), the man who built the train, and whom the passengers worship as a messiah-like figure. As with Game of Thrones or Battlestar Galactica, Snowpiercer takes full advantage of serialized storytelling to avoid a formula and keep the audience in suspense. Combine that suspense with the story’s mix of political satire and human drama for an always-riveting watch. Moreover, this season features a breakout performance by queer actress Rowan Blanchard as Alexandra, the long-lost daughter of Melanie. That Blanchard can go toe to toe with Bean and Oscar-winner Connelly in scenes of intense drama speaks volumes about her ability. She’s a talent on the rise, and fortunately, Snowpiercer puts her to good use.

The Sip: The Daquiri 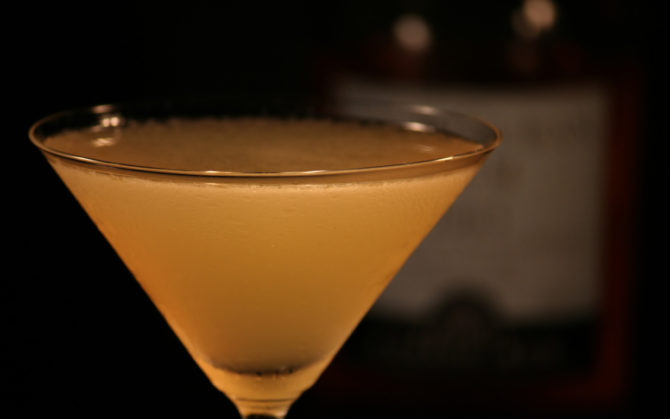 In honor of the return of Snowpiercer, we suggest something a bit frozen and slushy for this week’s sip. As one of our favorites, the sweet flavor pairs well with just about anything, whether a very hot romance, or a chilly sci-fi thriller.

Add ingredients to a cocktail shaker with ice. Shake well. Strain into a chilled glass.