Madonna threw a surprise party last night in New York City to kick off Pride weekend. It all began with her posting a message to her Instagram, warning fans that she’d be airing an exclusive little film she’d made, entitled ‘No Fear, Courage, Resist’, on the Nasdaq jumbotrons in Times Square at 10pm and midnight.

She also said she’d be auctioning off three signed Polaroids to help raise money for the Ali Forney Center, which supports LGBTQ youth, and the vogueing house, Haus of Us, which throws ballroom events for underage youth.

But that wasn’t all. She also showed up at the Boom Boom Room at the Standard High Line hotel for an intimate, exclusive performance for some very lucky fans. And as you can see, almost all of them had their cellphones out to film her appearance, including TV host Andy Cohen, who was among them.

Related: Madonna gets “inked for the very first time”

Madonna was preceded by some ballroom dancers performing to a remix of ‘Vogue’. She then came out – in tight leather shorts, harness and a fairly see-through sheer top – to sing ‘Hung Up’ while walking along the bar top. She followed this with a version of ‘I Don’t Search I Find’ from her Madame X album.

Madonna performed two years ago as part of NYC Pride’s 50th anniversary. She also did a surprise performance on New Year’s Eve in 2018 at the Stonewall Inn in Greenwich Village.

In a separate message posted to her Instagram stories today, Madonna said, “I’m throwing this party because Pride needs to be celebrated with a community of people who understand and know the meaning of oppression and fighting for freedom!

“Pride Island 2 years ago was magical. Last year we were all in isolation – but now it’s time to come together to Dance and Celebrate! I can never forget that NYC And the LGBTQ+ Community gave me life from day ONE!!!!”

Check out a fan-filmed clip of her movie in Times Square below.

This year’s main NYC Pride parade will be a virtual event, because of the pandemic. However, a handful of smaller events will be going ahead in person, including the street fair PrideFest on Sunday (June 27) in Greenwich Village. 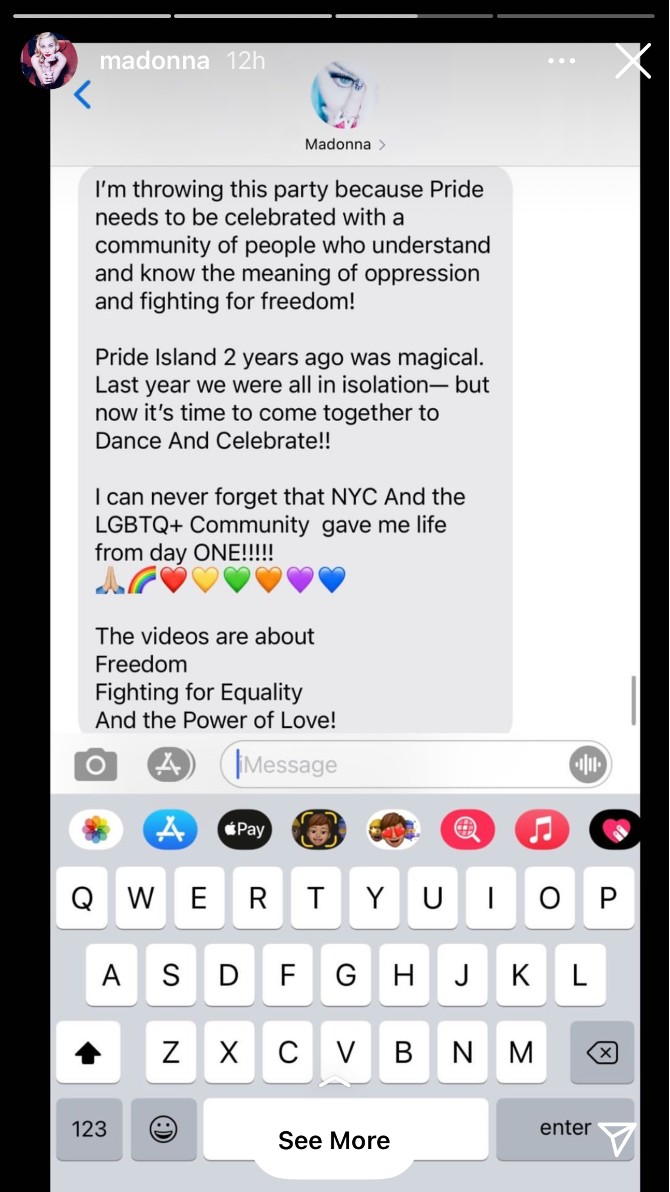