The Addictive: The Stand

We can’t tell if The Stand has the best luck ever, or the worst. CBS All Access presents this new adaptation of the seminal Stephen King novel as a new limited series. For the uninitiated, The Stand follows the survivors of a global respiratory pandemic (sound familiar?) that wipes out 99.5% of the world’s population. As the few immune to the disease fight for survival, they begin to dream of an elderly African-American woman (Whoopi Goldberg) and a sexy, seductive “dark man” (Alexander Skarsgård) calling them to rebuild society, and warning of a dangerous reckoning ahead.

We’ve read King’s original novel and attest to its magnificence: it may be the only book deserving mention alongside The Lord of the Rings and Dune as a sci-fi fantasy epic. And, as with many of King’s works, the book features key LGBTQ characters. The new series doesn’t focus as much on the queer characters as we’d like, though it does make subtle mentions of their sexuality. That includes the Trashcan Man, played by Ezra Miller in a wild, homoerotic, crazypants performance. The rest of the cast is equally good, led by Skarsgård and Goldberg, the latter of which does some of her best work in years. With COVID-19 plaguing the world, The Stand takes on an eerie, postmodern creepiness it might not otherwise have. That may distract some viewers. For us, it’s just a bonus: the series is thrilling, horrifying and quite simply, addictive as hell.

The Must: Ma Rainey’s Black Bottom

Oscar-winner Viola Davis and the late Chadwick Boseman lead this much-anticipated adaptation of the August Wilson play, which arrives on Netflix this week. Davis plays Ma Rainey, the real-life blues singer who lived an openly queer life in the 1920s. Boseman plays Levee, Rainey’s ambitious trumpet player who develops a roving eye for Rainey’s girlfriend (Taylour Paige). George Wolfe, the openly-gay director who helmed the original production of Angels in America brings his magic touch with actors to the big screen, and more than does justice to Wilson’s poetic dialogue. The supporting cast—including gay actor Coleman Domingo (Fear the Walking Dead) all turn in strong work, though the movie belongs to Davis and Boseman. Davis, an actress who knows no bounds, gives a ferocious performance in the lead—one likely to net her another Oscar nomination. Boseman, in his final role, gives the performance of his life: a feat all the more impressive considering he was dying of cancer during filming. Look for his name to be read aloud the morning of the Oscar nominations…and to be called the night of the big ceremony. You heard it here first folks.

The Creeper: Letters to Satan Claus

Anyone needing an antidote to holiday saccharine, look no further than Letters to Satan Claus the horror-comedy from openly queer screenwriter Mike Zara. The film follows Holly (Karen Knox), a big city reporter who returns to her tiny hometown for Christmas. When she accidentally addresses her letter to Santa to Satan, she must do battle with a murderous demon bent on killing all her loved ones. It’s that kind of movie. Zara injects a very tongue-in-cheek camp sensibility to the story, and even manages to work in a few LGBTQ characters to boot. The mix of humor and horror is an acquired taste to be sure, though viewers underwhelmed by the other litany of LGBTQ-centric holiday films this season should enjoy the anarchy of it all just as much as we did.

Dewdrop voiced soprano and grand diva Sarah Brightman performs this virtual holiday concert, alongside her ex-husband Andrew Lloyd Webber. Brightman lends her silvery vocals to a string of holiday tunes, and for a good cause: viewers can donate funds to The Global FoodBanking Network, an international charity geared to relieve hunger and starvation. With COVID-19 ravaging the third world, we suggest giving the show a look. Given this year’s dearth of holiday parties, it’s a fine way to fill the house with a joyous holiday sound. Her “Oh Holy Night” will likely give you chills.

The Throbber: The Male Gaze – The Boy is Mine

This anthology film lands on Amazon this week, comprised of five very gay short films about man on man love. Tales hail from the UK, US, France, Sweden and Mexico, each telling a different story about the attraction between men. For some, that means self-discovery and love. For others, danger and heartache await. At 95 minutes The Male Gaze never overstays its welcome, and keeps the stories coming in rapid-fire fashion. Anyone needing a bit of eroticism during this bleak midwinter should give the film a watch, either as one big sexy binge, or in bite-sized snack form.

We covered this film as it played the festival circuit and got a general release last year. This year, its message of courage and tenderness rings even louder than before. Gay Chorus Deep South follows the Gay Men’s Chorus of San Francisco on a tour of several very red states known for hostility toward LGBTQ people, and in hopes of bridging the blue-red state divide. With the aftermath of the election still upon us, the film renews our hope in the future, and helps get rid of the nasty aftertaste of the fall’s bitter political contest.

The Prom: A Virtual Event for Everyone

Anyone who fell in love with The Prom on Netflix last week—or anyone that didn’t get to be openly queer at prom—take note. This virtual event is meant to be the prom night so many of us wanted, but few of us ever got. Jonathan Van Ness hosts this mix of music and live performances, which will feature cameos by the cast of the film, as well as special live performances by Janelle Monae and Galantis. It’s a fine occasion to dust off and dance. Come for the gay, stay for the Monae. As they say. 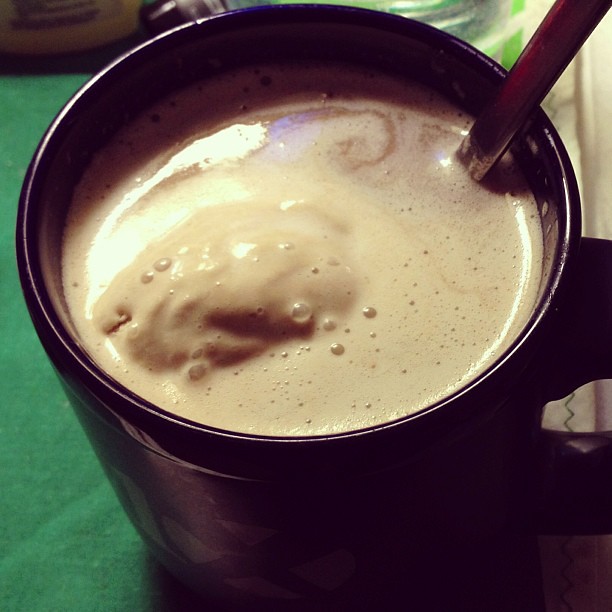 With holidays upon us, and with our ever-growing thirst for some relief, we offer up this seasonal favorite–again actually, by popular demand. Easier to make than it might seem, this mix of sugar, spice and hot creamy goodness (no puns, please) will have you aching for more, and pairs well with a little Sarah Brightman Christmas music.

Mix sugar, spices and butter together in a bowl until smooth. Transfer to a mug and add hot water and rum. Stir well until blended and serve.