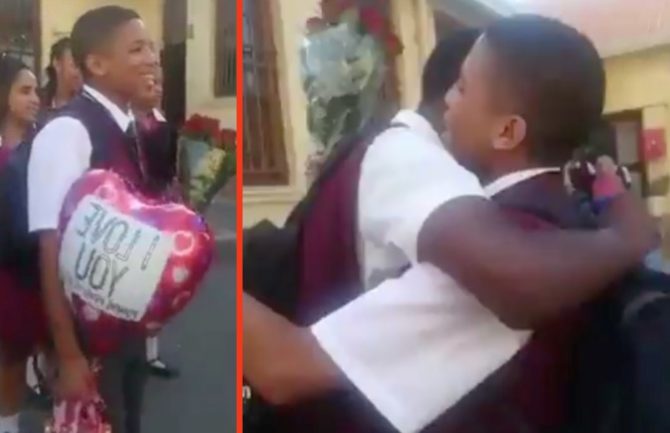 We typically try to keep the Valentine’s Day mush to a mushy minimum, but a viral video of two South African schoolboys celebrating the holiday as their classmates cheer on has melted our hearts right out of our chests. We should probably see a doctor about that.

But not before we watch this clip 30 more times.

In it, a boy waits in the schoolyard to surprise his Valentine with all the classics that we might usually scoff at: Flowers? Check. Frilly gift bag? Check. Balloons? You’d better believe that’s a check.

Related: Animated film about a gay boy’s crush is so cute it hurts

Then his crush enters the scene, smile on his face, and embraces the other boy. And the crowd. Goes. Wild.

Twitter user Brendon Gumede shared the clip, along with the caption: “This is so beautiful.”

this is so beautiful. ????? totally made my day. pic.twitter.com/d9FrFvrAoG

The comments are predictably saturated with hateful nonsense, but that didn’t stop many from praising the scene.

Another put it into context: “This just made my day, what a time to be alive indeed. High School is one of the most awkward phases for gay people. Good to see there is a generation that is going to grow up without dealing with such awkward environments.”

We may not fully be there yet, but hope is alive in South Africa.