Mayor Pete follows the eponymous mayor and his husband Chasten from Pete’s decision to run for president, all the way through Election 2020. The resultant film, much in the tradition of Feed and The War Room, offers a rare, stark look at the grittiness of American politics. Flanked by a team of devoted campaign aides, Buttiegig sets off across the United States shaking hands and making a name for himself as the politician of the future…and survives near-constant homophobic harassment along the way.

Moss and his camera present Pete Buttigieg as an almost unflappable entity—one who possesses both extraordinary political aptitude almost creates his public flaws. Whether confronted by angry protesters or winning the Iowa caucus, Buttiegeg keeps his same cool demeanor. The heart of the movie, on the other hand, is his relationship with Chasten. Moss captures the two in private, tender moments wherein the couple has a near-nonverbal connection with one another. The movie also shows of Chasten’s own political skills as an advisor and campaigner—he’s Pete’s secret weapon all along. Heartwarming, fascinating and uplifting as a political documentary can be, Mayor Pete should be a must-see for fans of Buttiegig, as well as anyone with an eye turned toward the American political stage.

The 24th Annual San Francisco Transgender Film Festival returns this week, bringing with it a host of new short films featuring trans themes and queer talent. This year’s selections include films by queer artists Dave Quantic, Katie Bennett & Blake Hansen, and Sean Dorsey, as well as performances by a litany of trans performers (including Theo Germaine). It’s a terrific way to celebrate Transgender Awareness Week by honoring trans voices…and keeping a lookout for cinematic talent on the rise.

This Spanish drama arrives on streaming this week, bringing with it a whole lotta tumult. Based on the stage play El día que nació Isaac, the film tells the story of two childhood friends, Denis and Nacho, who reconnect in adulthood. Both have married women, and both now face financial and domestic woes. When Denis offers to help solve Nacho and his wife’s fertility issues, secrets from the two men’s teen years begin to surface, bringing with them long-buried passions.

Watching Isaac, we couldn’t help but think about Y tu mamá también, Alfonso Cuaron’s film which deals with similar themes of masculine identity, youthful homoeroticism, maturity and how men and women relate to one another. Unlike that film, Isaac deals with the future ramifications of a same-sex teen romance. Marta and Carmen, the wives of Denis and Nacho, sense their longtime bond and feel intimidated by it, though both also see it as a necessary means to an end. Also unlike Y tu mamá, Isaac features a dark twist when it comes to the fate of the title character—another childhood friend of Denis & Nacho. By turns very sexy and gut-wrenching, we recommend it for anyone looking for a love story smart enough to know it doesn’t have all the answers.

This limited series arrives on Amazon this week, documenting the story of Jane Noury, a transgender teenager on the brink of adulthood. The show follows Jane as she prepares to graduate high school and head out to college, and into a world where her doting family can no longer protect her. The show also grapples with Jane’s own struggle over if she should have gender confirmation surgery prior to leaving home.

At its core, Always Jane is the story of a devoted and loving family—the kind anyone queer, straight or otherwise, would be lucky to claim. Noury comes off as a healthy, well-adjusted and dynamic young woman, though that status didn’t come about in a vacuum—she has her loved ones to thank. Far from the usual tales of victimhood, political strife, and transition, Always Jane presents its protagonist as both an aspirational figure and an aspiring one: Jane’s confidence is an example to other queer people of all ages. That her story is only just beginning should also remind viewers that even the most polished human beings can always aim higher.

The Jam: K. Flay “Nothing Can Kill Us”

Queer popper K. Flay drops her latest video this week, a pop-rock fusion ode to teen love, gay style. “Nothing Can Kill Us” tells the story of two teen girls in mad infatuation, and how their love for one another acts as a shield in a hostile world. Of course, losing that special someone can lead to a life of persistent regret, and catch a shadow over future relationships. “Nothing Can Kill Us” knows as much, and heralds powerful reminder: live, love and make each happy moment last. 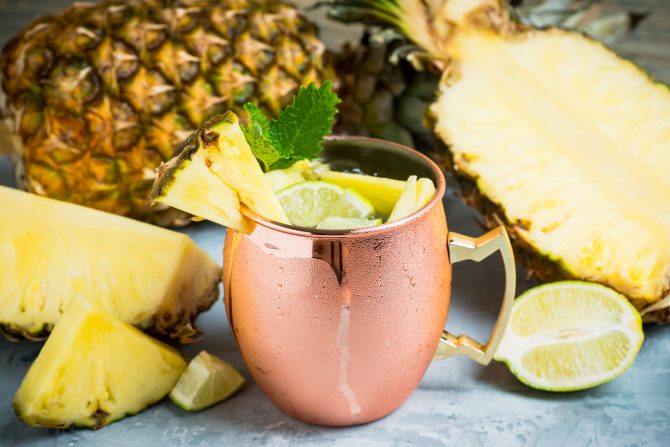 In honor of the Spanish romance of Isaac, we offer up this variation on a Moscow Mule which has a popular following in Spain. Combining the spicy tastes of ginger and pineapple, this savory drink has no shortage of kick…hence the name.

Combine pineapple and lime juice, ginger syrup and mezcal in a shaker with ice. Shake well. Strain into a highball glass with ice. Add seltzer to taste.