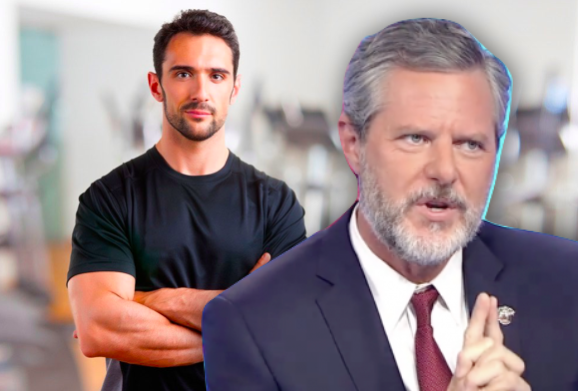 Real estate records and university emails show that in 2016 Falwell signed off on giving valuable property belonging to his non-profit Christian university to his personal trainer for almost nothing in return, Reuters reports.

23-year-old Benjamin Crosswhite was a recent graduate of the school when deals were signed. Today, thanks to Falwell’s generosity, he’s owner of a sprawling, milti-million dollar, 18-acre racquetball and fitness facility located on former university property.

Around 2011, Falwell, president of Liberty University in Virginia, and his wife, Rebecca, began personal fitness training sessions with Benjamin Crosswhite, then a 23-year-old recent Liberty graduate…

…In 2016, Falwell signed a real estate deal transferring the sports facility, complete with tennis courts and a fitness center owned by Liberty, to Crosswhite. Under the terms, Crosswhite wasn’t required to put any of his own money down toward the purchase price, a confidential sales contract obtained by Reuters shows.

On top of asking for $0 down, Liberty University gave Crosswhite a $1.2 million loan with a super low interest rate to buy the property from the school, then paid him almost $650,000 to lease it back to them.

Sounds like a great deal for Crosswhite and a terrible one for the university.

When approached for comment, all Crosswhite had to say was, “My wife and I consult each other before every major business deal and we bought the complex from Liberty together. My wife and I both work around the clock to make our business succeed.”

Meanwhile, a spokesperson for the school said Falwell was merely trying to be “a business mentor” to young Crosswhite.

But this isn’t the first time Falwell has been involved in what can only be described as clandestine financial dealings with a young man.

Earlier this year, it was reported that he once contacted Michael Cohen, Donald Trump’s longtime personal attorney, for help regarding an “embarrassing personal matter” involving him, his wife, and their 20-something pool boy, Giancarlo Granda, who they originally met a hotel while on vacation.

Rumor had it, Granda had somehow gotten his hands on scandalous photos of Falwell’s wife and was blackmailing them to the tune of $1.8 million, and Falwell needed Cohen’s assistance in navigating the situation.

Both the Falwells and Granda denied the whole thing, though the Miami Herald later confirmed that x-rated photos did, indeed, exist and that they were were taken at the Falwell’s farm in Virginia and at a vacation lodge in Islamorada, Florida.

Later, it was uncovered that the Falwells agreed to lend Granda a modest $4.7 million so he could purchase a youth hostel, which also included a restaurant and a liquor store, in the Miami area.

The similarities between the pool boy story and the personal trainer story are striking, to say the least. Both involve Jerry Falwell Jr. loaning large amounts of money to strapping young men in the early 20s for almost nothing in return.

We’re starting to notice a pattern here. Or maybe it’s just what, ahem, generous Christians do?