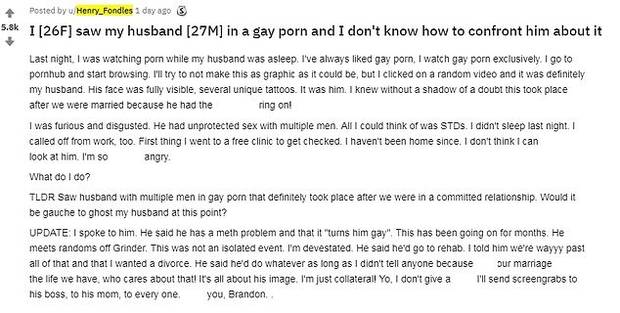 A woman claims to have made a shocking discovery about her husband, Brandon, so she did what anyone would do… and posted about it on Reddit.

The woman, who claims to be 26-years-old, says she’s positive it was Brandon in the video because of his “unique tattoo”. To makes matters worse, she’s pretty sure it was filmed after they were married.

How does she know? …Because he left his wedding ring on!

Related: Straight man contemplates hooking up with another dude after sex with the wife turns ‘boring’

“He had unprotected sex with multiple men,” she laments. “All I could think of was STDs. I didn’t sleep last night. I called off from work, too.”

She continues: “First thing I went to a free clinic to get checked. I haven’t been home since. I don’t think I can f*cking look at him. I’m so f*cking angry.”

In an update, the woman says she eventually confronted Brandon and he confessed to having a problem with crystal meth. He also told her he’d been sneaking around with other guys who he met on Grindr.

Related: His wife won’t have sex with him anymore, so he’s turning to older men

Despite apologizing and promising to seek treatment for his meth addition, the woman says she wants a divorce, saying she’s “furious and disgusted” by the whole thing.

“He said he’d do whatever so long as I don’t tell anyone,” she writes. “It’s all about his image. I’m just collateral. Yo, I don’t give a f*ck! I’ll send screengrabs to his boss, his mom, to everyone!”