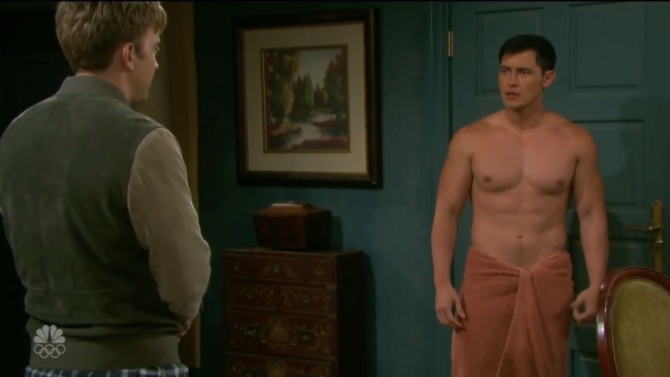 Major gay drama is unfolding on Days of Our Lives.

Chandler Massey, who played Will Horton from 2010-2014, has returned to the daytime series… three years after his character was killed off.

OK, so to make a very long and complicated story short: In September, Will’s former flame Sonny was about to marry some guy named Paul when their wedding plans were interrupted with news of Will’s return.

In the weeks leading up to the wedding, Will made a few brief appearances, first in a hallucination to his alcoholic father, then in a dream the night before Sonny’s wedding.

Related: Days Of Our Lives Has First Gay Kiss—Finally!

He was eventually reunited with his mother, who has been helping him remember all the people he forgot after he died. It’s been a painfully slow process, but he’s slowly starting to get his old memory back.

But the backstory isn’t what matters here. What matters it that this week Will was finally reunited with Sonny. Sparks were immediately reignited as they talked about their previous hookup, with Will asking Paul, “Tell me, was the sex between us good?”

Massey won three consecutive Daytime Emmys for playing Will, and was a part of television history when he portrayed him during the series’ first kiss between two men in 2012.

Watch the steamy reunion below…