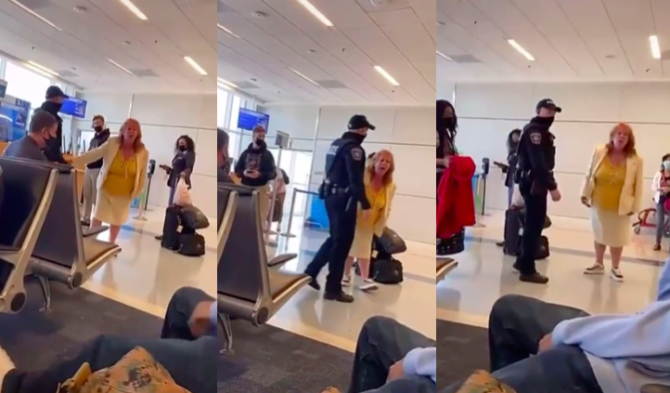 There has been an abundance of Karen videos over the last year. So many, in fact, that we’ve almost stopped paying attention to them. But this one is extra special. In fact, it might be the Karen video to end all Karen videos.

The 40-second clip was purportedly taken earlier this week at the Indianapolis International Airport and quickly made its way onto TikTok and Twitter, where it has racked up millions of views.

It shows a woman, who identifies herself as “Terry Ann”, demanding to “speak to the manager of the airport” after she was allegedly stopped by security when she tried barging into a restricted area.

“He threw me to the ground!” Terry Ann shouts at a police officer. “I want the manager of the f*cking airport here!”

Then she asks the people around her, “WHO SAW HIM CHOKE ME TO THE GROUND!”

When a man nearby tells Terry Ann that he saw her try to enter a restricted area, she shouts back, “HE CHOKE HOLDED ME TO THE GROUND! I AM A WOMAN IN A DRESS!”

(For the record: She’s wearing separates, not a dress.)

“BOO HOO?!” she hollers. “YOU F*CK OFF! I WANT THE MANAGER OF THE AIRPORT HERE!”

As a result of the video going viral, “boo hoo” has been trending on Twitter all morning.

Just another Marjorie wanting to speak to the manager! (New name instead of a Karen)

“I want to speak to the manager OF THE AIRPORT!”

-a whole Karen. Out-karening herself.

My name is Karen and I don’t act like that….ever!

Why is "Boo hoo" trending? This woman is accused of entering a restricted area at Indianapolis Airport. Clad in a blazer, skirt and trainers, she went from demanding different treatment because she's a "woman in a dress" to cursing out the person recording https://t.co/WkDG5mItAu

On next weeks episode of, ‘How to Get on the No Fly List’…

After seeing the Boo Hoo Karen video…I couldn't help but wonder is she expecting an upgrade to first class. pic.twitter.com/htq8cMqQLc

I bet my house I know who she voted for.