A woman has been widely criticized for her planned choice of outfit as a guest at a same-sex wedding. The situation came to light on Reddit’s popular ‘AmITheAsshole’ subreddit forum (AITA). A man wrote in to explain what his girlfriend wanted to wear, asking if he been reasonable in asking her to think again.

The 25-year-old man said his 30-year-old girlfriend had a “particular sense of style”, often dressing in bright, eye-catching clothing. He normally had no problem with this.

“The thing is, sometimes she likes to incorporate memes into her clothes,” he continued. “No problem. It’s cute. But now she wants to wear a dress inspired on the meme ‘gay rat wedding’ to my friend’s wedding. He and his fiancé are gay. I told her, maybe that is not really appropriate? The dress in question would be full of little stuffed rats, pride flags and a big ‘I SUPPORT GAY RATS’ on the front. My friend is not a big fan of the way my GF dresses and I think this dress may cause a certain uproar in the wedding.”

He said his girlfriend did not take his words well, accusing him of, “throwing water in her flame of creativity”.

“The wedding is next month, so she has plenty of time to think about another thing to wear. Should I just let her go with the dress? Am I the asshole in this situation?” he asked. 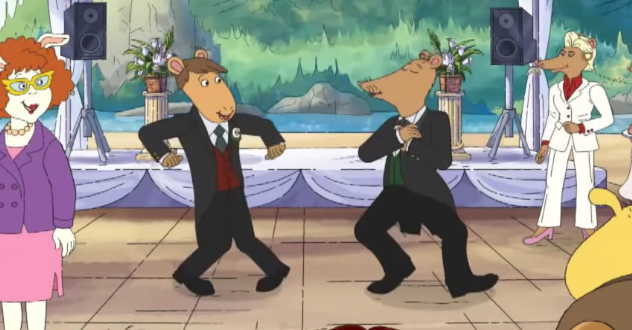 The ‘gay rat wedding’ meme dates back to 2019. It related to PBS Kids’ show Arthur, which aired an episode in which beloved teacher Mr. Ratburn married his boyfriend.

The Reddit dilemma has prompted over 3,500 replies. The vast majority assured the boyfriend that he is not being an asshole for trying to persuade his girlfriend to come up with another idea.

“Add to it that it completely makes her the center of attention when it should be about the couple,” commented JuryNo7670, again prompting over 20k upticks.

Others agreed. “It’s their day, the newlyweds should be the center of attention,” said GoodGirlsGrace. “And they explicitly said they don’t like this. Why would you do something the grooms disapprove of at their wedding? Either you want attention, or you want to piss off the grooms.”

“More than just ‘kinda insulting’ it’s making the concept of allyship and co-opting the symbol of pride for the queer community for lulz,” said MountainBean3479.

“Does she not see how incredibly dehumanizing and objectifying what she wants to do is?” asked RafRafRafRaf. “It’s a gay wedding, so that makes a meme about rats a good fit? ‘Throw some rainbow shit at it, the gays love rainbows’ seems to broadly summarise her take.”

In something of a plot twist, the original poster later added an update to explain that his girlfriend, who uses Reddit, had come across his posting (perhaps he didn’t plan on it going quite so viral). She was not happy to see her sartorial choices questioned online.

“So… the conversation did not go well. She was livid with me for exposing her in this way, and although I showed her the comments (most important, the ones from the LGBTQIA community) she refused to admit that her dress was a poor choice, but in fact, her way to ‘appreciate the gays’. That did not sit well with me. Love can move mountains, but can NOT maintain a relationship with a homophobic. So, now I am going to the wedding a single, rat-free-dress, man!

“I did reach out to my friend and send him this post. He thought the situation to be hilarious, but if she did show up in the dress, he would def kick us to the curb.”