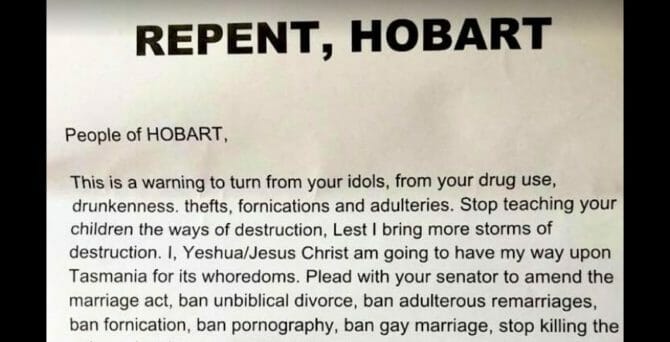 Call your priest; Skype your rabbi; tweet @ your weatherman.

A letter written by Jesus warns of imminent storms of Biblical proportions (literally) on Tasmania, Australia so long as gay marriage is the law of the land.

Jesus Himself delivered the proclamation through a faithful servant by way of a mailbox-stuffing campaign — typical Jesus move.

The note warns locals to repent, and they’d better have because it doesn’t sound like He’s messing around.

“This is a warning to turn from your idols, from your drug use, drunkenness,” the letter reads.

“I, Yeshua/Jesus Christ am going to have my way upon Tasmania for its whoredoms,” it goes on.

“Plead with your senator to amend the marriage act, ban unbiblical divorce, ban adulterous marriages, ban fornication, ban pornography, ban gay marriage, stop killing the unborn lest I rape your state that there be poverty like you have not seen.”

Australia, of course, legalized same-sex marriage in December of last year in a historic bill passed in the House of Representatives.

View the full note below, and be warned!

170 years on, it seems Hobart is once again “the Sodom of the South Seas”. Thanks to Martine Delaney for this photo of a bizarre poster in Salamanca Courtyard.